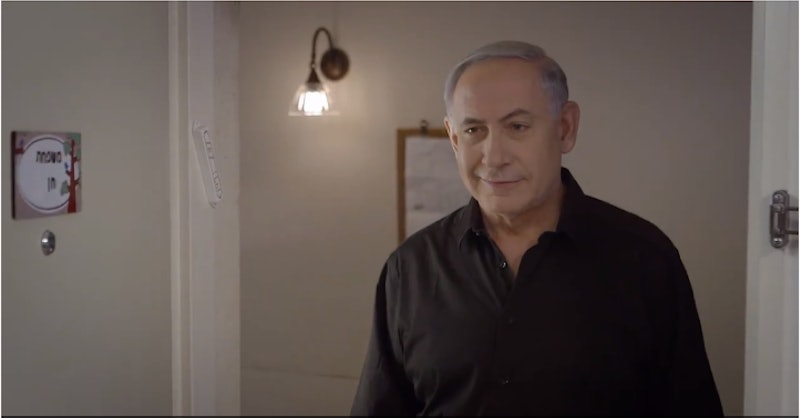 Election season is a brutal, exhausting time for anyone — even as a mere spectator, I admit — but that sentiment undoubtedly increases tenfold for those actually involved in election campaigns, what with the magnified scrutiny of candidates' personal and past lives, and the rightful grilling of where they stand on issues. Overseas, it is no different, and as Israel gears up for its elections in mid-May, Prime Minister Benjamin Netanyahu released a "good babysitter" campaign ad earlier this month, promising the country that he would take care of their children.

No, there's no mistranslation there — in the English-subtitled ad, "Bibi" Netanyahu surprised a couple preparing for a night out, sans children, at their doorstep. He said:

You ordered a babysitter? You got a Bibi-Sitter!

As the poor woman expresseed confusion at the Prime Minister of Israel babysitting her child, Netanyahu then went on to tell the bewildered couple (who are very handsome, by the way) that it's either him, or "Tzipi and Buji," a reference to his opponents, Tzipi Livni and Isaac "Buji" Herzog, who make up the coalition ticket that poses the biggest threat to Netanyahu's ruling party, Likud.

Oh, no, the couple protested, not them! Buji, they say, would give away the house, carpet and all — a swipe at Herzog's dovish stance on the Israeli-Palestinian conflict (well, dovish in relation to Netanyahu's). On the other hand, Livni would not last two hours in one place, said the woman, to which Netanyahu agreed in a reference to the former Israeli Justice Minister leaving Likud to join several other parties in succession, before settling down with Herzog to form the Zionist Union:

By the time we get back, she’ll have moved on to the neighbors.

Cut to the couple returning home to a cozy Netanyahu bundled up in a blanket and eating popcorn in front of a TV. As the couple greets him "Shalom," or "Peace," Netanyahu responds:

Woo! Talk about snarky. His reply is an awkward reference to the Arab-Israeli conflict, chief of which is the ongoing nuclear talks between U.S. and Iran that Netanyahu is adamantly opposed to, going so far as to slight President Obama in his attempt to push Congress to step up sanctions against Iran.

Bizarre as the ad might be, Netanyahu faces a tough month ahead of the March 17 elections — though his party, Likud, is currently leading in pre-election polls, the Zionist Union, with "Tzipi" and "Buji," isn't far behind.