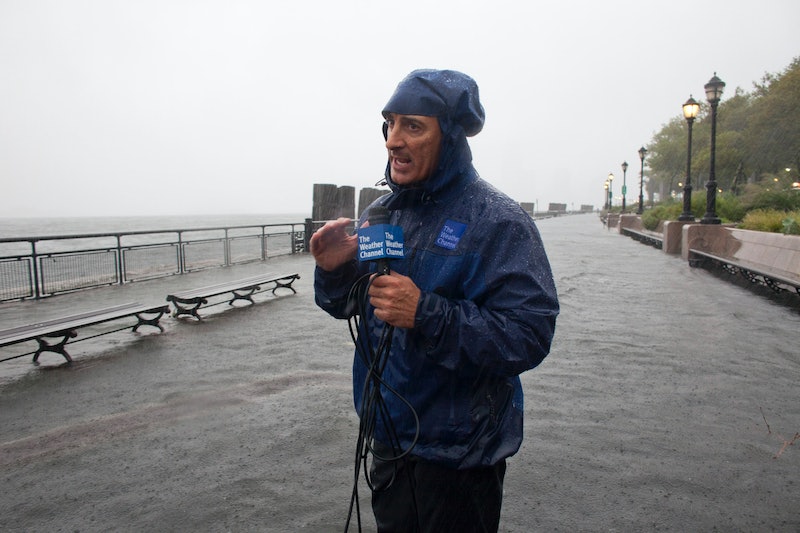 It's well-known that if Jim Cantore of the Weather Channel arrives in your town, it's time to make sure your affairs are in order and/or get the hell out, because whatever weather is coming your way is no joke. Cantore has made the stand-up live shot in driving wind/rain/snow a staple of live television, so it was no shock that he showed up in New England over the weekend, which is getting crushed by one snowstorm after another this winter, to freak out over thundersnow. Put it this way: Cantore doesn't show up when the forecast calls for flurries.

What's sort of adorable about Cantore is that no matter how many weather events he covers, he always seems excited for the next one. During an insane live shot on Sunday, snow swirling around him, ski goggles on, wind whipping at him and his camera person, Cantore experienced thundersnow. It's when thunder and lightning occur during a snowstorm.

To say he was excited about the thundersnow is a gross understatement. Cantore, the king of bad weather, who has literally walked into hurricanes, lost his ever-loving mind.

According to his bio on the Weather Channel, Cantore has covered a ton of major weather events over the past quarter century, including Hurricanes Katrina and Irene, and Superstorm Sandy. He grew up in Vermont, so it's no wonder that crazy New England weather became his thing.

Cantore gets a little intense during hurricanes, and seriously tests the limits of the special L.L. Bean jackets the Weather Channel field reporters wear. His camera person had to be wondering what this crazy man was doing when he ventured into the tremendous winds of Hurricane Isaac in 2012. The wind and rain was absolutely pelting him, but he kept going.

Cantore is ready for anything whether he's at the scene of a storm, or getting ready for a storm. He's even prepared for non-weather related incidents during live shots.

Last year, when Cantore was reporting on a winter storm in South Carolina, some random guy tried to crash the set. Cantore was having none of it, and had a knee at the ready for the would-be attacker.

Then there was this toddler who got just as excited as Cantore over the thundersnow on Sunday. Looks like Jim Cantore inspires weather love wherever he goes.

Hey, maybe this kid is the next crazy meteorologist who stands out in driving wind on live television.