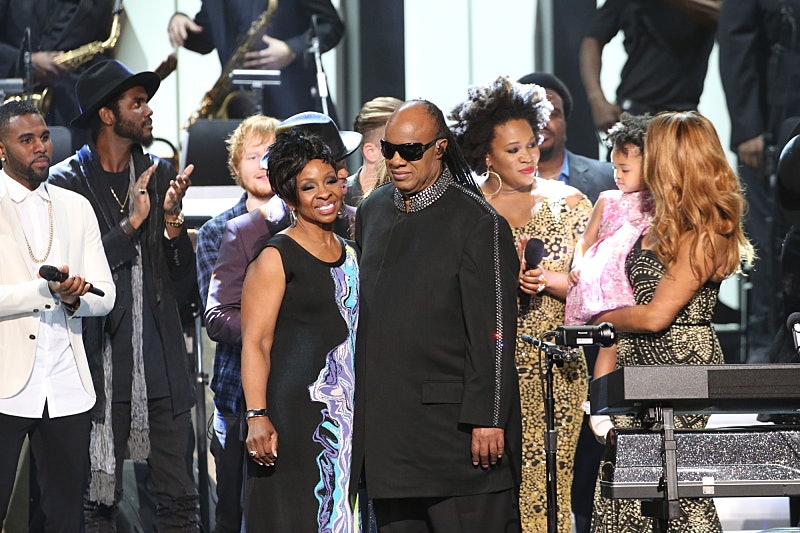 If you didn't get enough random combinations of artists performing together from the Grammys, then you're in luck. The Grammys will be saluting the legendary singer Stevie Wonder in the special Stevie Wonder: Songs in the Key of Life airing Monday night. Some of the most popular pop vocalists will take the stage together to sing the classics from this singer-songwriter who has won 25 Grammys and has sold more than 100 million albums and singles since his singing career began at age 11 in 1961. Wonder is also the only artists to win Album of the Year honors three times out of four consecutive years. So the reason for the special seems to be simply that Wonder is, well, worth celebrating.

While the names of the performers may be familiar, the songs might now. Wonder has had a career that has spanned decades. Here are three essential tunes you should be familiar with before watching the Grammys' salute on Monday night.

From his 1970 album Signed, Sealed, Delivered, this single spent six weeks at No. 1 on the Billboard R&B chart and peaked at No. 3 at on the pop charts. The chorus and title for the song actually came from Wonder's mom, Lula. As Wonder was experimenting with the melody, she told him those exact words as she was listening to him work.

The song has been widely covered by many artists, including Elton John and Chaka Kahn. It was also the theme song of President Barrack Obama's 2008 presidential campaign, and the track was played after Obama's speeches at campaign events.

"I Just Called to Say I Love You"

This 1984 single didn't just top the Billboard Hot 100 chart — this tune has won both and Oscar and a Golden Globe for Best Original Song. The song appeared in the comedy film The Woman in Red, written and directed by Gene Wilder and starring Charles Grodin and Gilda Radner.

This funky 1972 song starts with a distinctive drum beat that Wonder and English rock guitarist Jeff Beck came up with together, which then led to them recording the first demo of the tune together. Wonder released it as the lead single for his album Talking Book and Beck also released a version of the song with the power trio Beck, Bogert & Appice. Motown CEO Berry Gordy knew from the start that it would be a huge hit.

And there's plenty more where that came from.