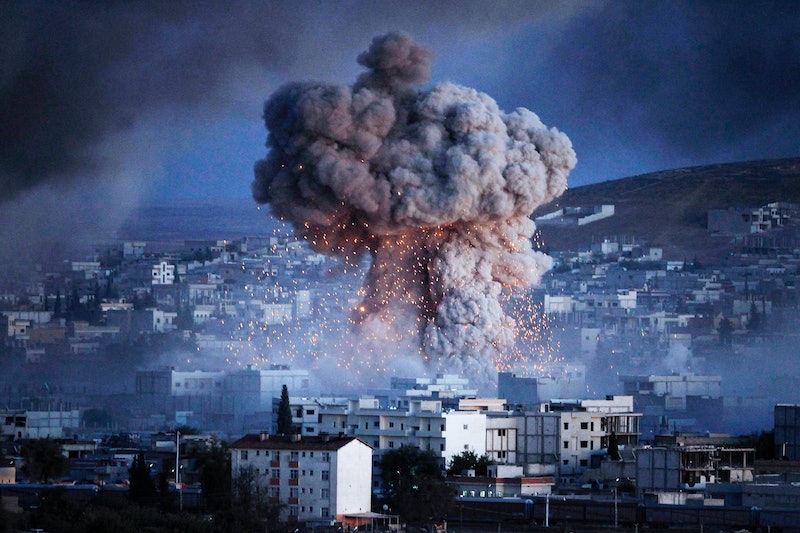 Following the execution of 21 Coptic Christians, the Egyptian government says it has retaliated against the Islamic State of Iraq and Syria. On Monday, Egypt launched air strikes on ISIS targets in Libya, joining the global fight against the terrorist group.

According to CNN, the air strikes targeted ISIS weapons and training centers in the port city of Derna. In a statement released on Egyptian television, military officials said the strikes were a revenge attack, adding: "Avenging Egyptian blood and punishing criminals and murderers is our right and duty."

Egyptian President Abdel Fattah al-Sisi called the reported executions of 21 Egyptian nationals, initially broadcast by ISIS in an online video, an "abhorrent act of terrorism." The Egyptian president said in a televised address:

Egypt reserves the right of retaliation, and with the methods and timing it sees fit for retribution from those murderers and criminals who are without the slightest humanity.

The harrowing ISIS video showed a group of men wearing orange jumpsuits kneeling on a beach as black-clad militants stood behind them, holding knives. One of the militants speaks, in English, to the camera, saying that these men were going to be killed for being Christian. The men are then beheaded.

The men executed were part of the Coptic Orthodox Church, which is the largest Christian denomination in Egypt and across the greater North Africa and Middle East regions. In the video, the ISIS militant addressing the camera called the church "hostile." Coptic Christians are routinely persecuted in the region, and reports suggest that the attacks were growing worse over the last month.

Coptic churches worldwide condemned the brutal murders on Sunday. In a statement, Bishop Angaelos, General Bishop of the Coptic Orthodox Church of the United Kingdom, said:

While every life is sacred and every death tragic, the particular brutality demonstrated in this instance and others like it shows not only a disregard for life but a gross misunderstanding of its sanctity and equal value in every person.

Our prayers are particularly with the families of these young Coptic men, who were fathers, brothers, sons and friends of many within their tight-knit rural communities, in which their absence will cause significant loss and sorrow. Their families are not only deprived of breadwinners who had travelled to Libya to support them, but of the joy that they bring when they return.

World leaders have also condemned the executions. White House press secretary Josh Earnest called the murders "despicable and cowardly," adding that it was yet another act of terrorism that "underscores the urgent need for a political resolution to the conflict in Libya."

"ISIL's barbarity knows no bounds," Earnest said in a statement. "This wanton killing of innocents is just the most recent of the many vicious acts perpetrated by ISIL-affiliated terrorists against the people of the region ... which only further galvanizes the international community to unite against ISIL."

The video of the mass beheadings in Libya came just a day after ISIS released a video purporting to show 17 Kurdish fighters being held captive in giant cages. ISIS has threatened to murder these hostages in the same way the militants killed Jordanian pilot Moaz al-Kasasbeh, who was burned alive.