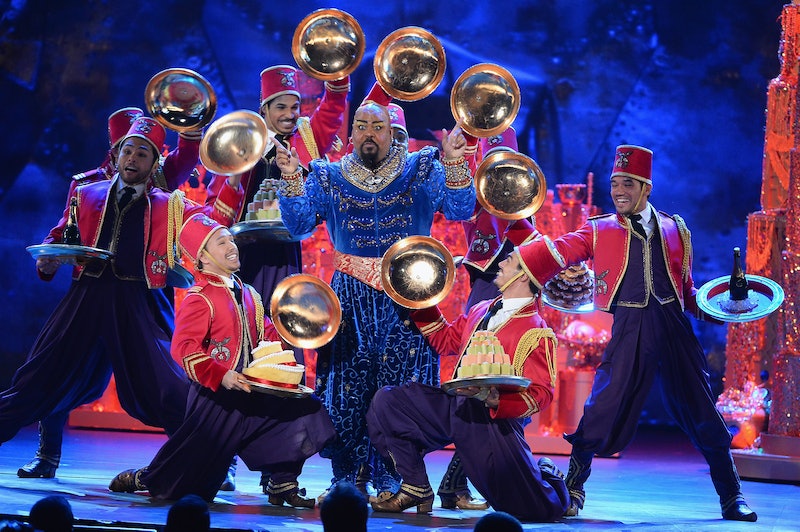 Ladies and gentlemen! Boys and girls! Batman villains of all ages! May I direct your attention to Fox, because this week's episode of Gotham is going to the circus. According to TV Guide's description of "The Blind Fortune Teller," "Gordon takes Dr. Leslie Thompkins to the circus, but the outing turns dangerous when the circus comes under attack." Well golly, Detective Gordon sure knows how to show a lady a good time. I'm not even being facetious. I'm sure a doctor and a detective are thrilled at the prospect of a little light crime-solving in the middle of their romantic night out. Plus, the circus is an important place in Batman lore. Who will these two run into? Who is the ringmaster of this circus? Is he from DC Comics?

James Monroe Iglehart, who will play the circus' ringmaster in the episode, recently won a Tony Award for his portrayal of The Genie in Aladdin on Broadway, pictured above. One would think that such an acclaimed and charismatic actor would not be put to waste on Gotham. However, this episode is already teasing the reveal of the Joker. While my gut instinct tells me that this ringmaster is a new character created by Gotham, here are a few options to get the ball rolling.

As seen in the preview clip above, this is the circus we are going to, and it is very significant to Batman canon history. In the comics, this traveling show's top performers are The Flying Graysons, a married couple of trapeze artists. Their equally talented son, Dick Grayson, will grow up to become Robin. The Flying Graysons are killed thanks to a mafia boss named Tony Zucco. He has yet to show up on Gotham, so this episode will likely be a tease of what's to come on the series rather than a piece of Batman and Robin history. Bruce Wayne is still a child himself, so I don't think he's ready to adopt a ward just yet.

The ringmaster of Haly's Circus, however, is not significant. Besides failing to live up to Zucco's demands and thus allowing Jonathan and Mary Grayson to fall to their death, he is not super-powered or particularly villainous.

Also in the preview clip for the episode, the Flying Graysons seem to be a much larger group. Is that to keep us off the scent? Are they going to get taken out one by one? During the show, they are attacked by clowns, and the ringmaster is unable to stop them. Another preview shows the young couple as bickering kids from warring households. Mary is part of the Lloyd family for now. How does the ringmaster wrangle a circus with a family feud?

There are two ringmasters in The Flash comics. One was Nathan Bliss, a metahuman villain in The CW's run of Flash: Season Zero comics. We surely won't see Mr. Bliss cross over to the Fox series. However, the other "Ringmaster" that Barry Allen faces in DC Comics is a vigilante by the name of Beauregard Baer. He was an author who Lisa Snart hypnotized into becoming a super-villain who thought he was a hero and then attempted to murder Iris West and frame Barry Allen for the crime. Confused? This is nothing compared to Harrison Wells.

Unfortunately, Beau Baer is not exactly a circus employee. He literally is a master of rings. He flies around on rings. His weapons are rings. He wears rings on his suit. After almost a full season of The Flash on The CW, where they go out of their way to explain the villain's cheesy names by having the pun-happy Cisco Ramon dole them out, are you really surprised?

While the many DC Comics shows on television are welcome to the entire library of rogues and heroes, I do not think that James Monroe Iglehart is playing Beau Baer, though it would be cool. I suppose we'll have to wait and see what Gotham's ringmaster has in store.