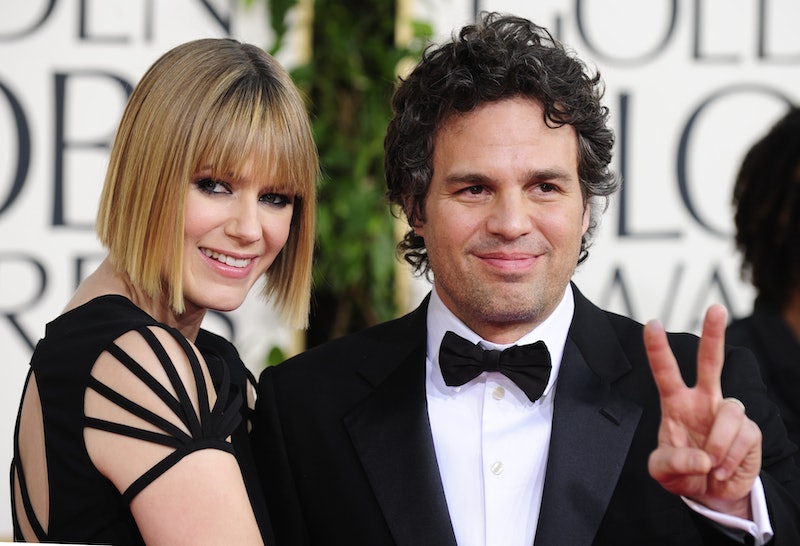 You know Mark Ruffalo as the charmingly chill actor who frequently gets cast in the role of "good natured dude" in some of your favorite movies. However, you may not be as familiar with his better half. Who is Mark Ruffalo's wife, Sunrise Coigney? They say that behind every good-natured dude, there's a woman with a name that invokes the beauty of nature (Or, maybe I just say that. Whatever. Roll with it).

According to Zimbio, Coigney and the Foxcatcher actor have been together for 15 years. They got married in 2000 after she turned him down once, as The Guardian reports. Just a year after getting married, they had a baby boy named Keen in 2001. In the following years, they brought two more humans into the world — Bella Noche in 2005, and Odette in 2007. As far as one can tell from red carpet pictures and the amount of children that they've produced, they seem to be ridiculously in love. How did they meet, you ask? According to an interview with Ruffalo in The Guardian, Coigney and Ruffalo made their first acquaintance on the street. In short, their meet-cute led to love, a family, and a life of wedded bliss.

Let's learn more about her though! She's a Coigney is French-American actress who was born in California. According to her IMDB bio, Coigney is from San Francisco, and was born in 1972. She's had a few small roles in TV shows in the early aughts, including 100 Centre Street and Line of Fire. Additionally, she played Michelle in the 2001 film Campfire Stories , which starred Jamie-Lynn Sigler and Charlie Day. An interesting combo...

Furthermore, she's friends with Julianne Moore, so she MUST be cool. In an interview with Film Independent from 2011, she recounts the story of Mark getting his role in The Kids Are Alright. I won't spoil anything for you, but the tale begins with "Julianne and I are actually friends, and we started texting..." Like it's such a casual thing...

To make them an even cooler, couple, I'm sure their adorable kids bi-lingual!!!

One thing's for sure... They really enjoy being goofily in love on the red carpet.

Look at the fun they have!

Don't ever change, you two!!