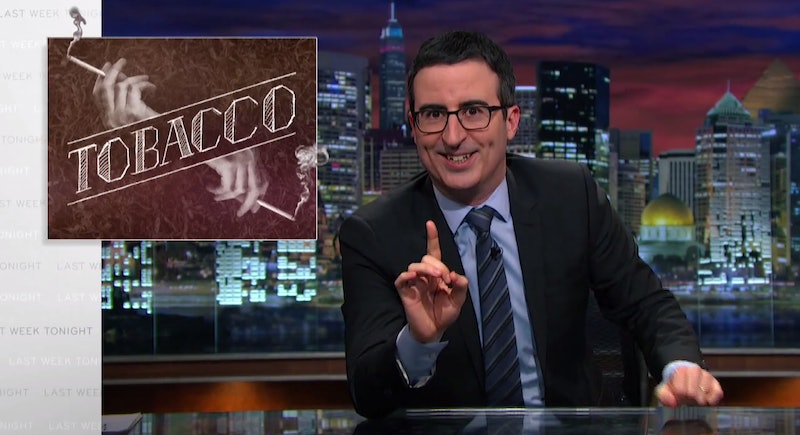 This week on Last Week Tonight, John Oliver took on Big Tobacco, which is quite possibly the most dangerous and irresponsible industry in the world. The multi-billion dollar industry has been getting America hooked on cigarettes since colonial times, and when the country wised up to its health risks, it began to find other, sneakier ways to continue selling its product all over the world. Well, Big Tobacco, you might have met your match in John Oliver, who definitely did not mince words about the industry in his latest segment.

Oliver opens the episode with how cigarettes used to be perceived in this country.

Tobacco — it used to be a cornerstone of American life. It was how we knew sex was over before the female orgasm was invented.

Basically, cigarettes were everywhere and on the hands of everyone — prominent TV personalities, kids' cartoon characters, and the all-American cowboy who was the Marlboro Man, who showed America that smoking was a prerequisite to being a man. Oliver notes that he's as synonymous with "ruggedness and freedom as he was with dying from smoking-related diseases." Because what Marlboro didn't advertise was that at least four of the Marlboro cowboys died that way.

Oliver shows a clip of Joseph Cullman, former Philip Morris CEO, who tells an interviewer, "It's true, that babies born from women who smoke are smaller, but they're just as healthy as the babies from women who do not smoke. And some women would prefer having smaller babies."

You heard it, pregnant ladies. Enough cigarettes and you're pretty much just shooting out Lego babies. They fit in Star Wars toys — who wouldn't that? That's adorable!

But, perhaps feeling the pressure, tobacco companies eventually voluntarily retired the Marlboro Man and Joe Camel by the late '90s. As a result of the reduced advertisement, adult smoking rates in America fell from 43 percent (in 1965) to 18 percent (in 2014). Oliver points out that with this drastic plummet in sales, one would expect the industry to also plummet, but that's not exactly the case. In a clip from 2008, a reporter asks a tobacco farmer if it was the best time ever to be a tobacco farmer, and he answers, "Probably the most profitable."

So it's an aging product that's decreasing in popularity and yet somehow it just can't stop making money. It's basically the agricultural equivalent of U2.

So why is this? Oliver explains that while Americans were smoking less, people in other parts of the world were smoking more. Like that chain-smoking Indonesian baby, for example, who at one time smoked 40 cigarettes a day and was completely addicted. After a video of the tot smoking went viral, he became an international news sensation for a brief time, but where his story gets really interesting is the brand of cigarettes he was smoking.

That brand was A Mild, which is owned by Philip Morris International (PMI), the company that sells Philip Morris products to countries outside of the U.S. Like other tobacco companies, PMI has been pushing its products in places like Indonesia, where two-thirds of adult males smoke and the restrictions are few. Oliver says, "And I do mean very few."

Oliver then plays a news segment that shows a school in Indonesia that has a Marlboro-sponsored kiosk at its entrance, where kids can buy loose cigarettes for a dime a piece. There's even a free lighter on a string for them to use.

And Indonesia is just one of many countries where PMI has expanded. According to Oliver, the company owns seven of the world's top 15 international tobacco brands, one of the most prominent being Marlboro.

Recently, Marlboro has seen a boost in sales after its "Don't Be a Maybe, Be a Marlboro" campaign. Oliver then plays a promotional video of that campaign, which can be summed up as follows: Marlboro has been declining because its targeted market has been too hesitant to live life to the fullest. This is what Oliver had to say about it:

That is a pile of horse shit. Even Don Draper looks at that ad and says, "Pull it back a little bit. These are cigarettes we're talking about; not Jesus."

And if countries do try to get these companies to pull it back, Big Tobacco will put them through legal hell. Oliver takes us on a world tour of Big Tobacco litigation, starting in Australia. In 2011, Australia passed a plain packaging law that produced cigarette packages that emphasized images of gruesome smoking-related health conditions while relegating the brand name to the bottom. Of course, multiple tobacco companies tried suing Australia to prevent the law from happening, but Australia won the first round. Then Philip Morris Asia got involved and sued as well.

That's right, a company was able to sue a country over a public health measure through an international court. How the f*ck is that possible?

Apparently, PMI had dug up a treaty from 1993 that stated that Australia couldn't seize Hong Kong-based companies' properties, so before it started litigation, it moved its Australia business to its Hong Kong-based division and then sued claiming the property being seized was its trademarks on its cigarette packages.

But it wasn't just PMI who came after Australia. Three countries — Honduras, the Dominican Republic, and Ukraine — also filed complaints with the World Trade Organization against Australia's plain packaging law. However, it turns out, Ukraine has zero trade with Australia of any tobacco products.

So Ukraine is inserting themselves into something they have nothing to do with. They're taking the Kanye West approach to international trade disputes.

Not surprisingly, these complaints are fully backed by PMI, who will even cover some of the legal costs. But Big Tobacco doesn't just go after big countries; the small South American country of Uruguay was also a target. Oliver points out that it's a country we think so little about that the audience didn't even notice he was deliberately highlighting the wrong country on a map to prove his point.

So for such a small country, the legal fees were overwhelming, and NYC Mayor Michael Bloomberg even had to step in to donate $500,000 to help cover them.

On a scale of how shitty that has got to feel, it's just barely higher than borrowing money from your ex-girlfriend's current boyfriend's stepdad.

But it gets worse. PMI also targeted the African country of Togo, one of the 10 poorest countries on earth, because it also wanted to enforce new tobacco laws. All they wanted to do, really, was include health risk warnings on their cigarette packages, which is pretty standard for the cigarette packs we see in America. But since roughly 40 percent of the country is illiterate, the government wanted to use similar visuals that Australia proposed. When PMI discovered this, it threatened to sue Togo.

Oliver and his team actually reached out to Togo and asked to see its correspondence with PMI. The African country sent him a letter that they had received from PMI threatening litigation that would basically bankrupt the country. Understandably, Togo was terrified and ended up backing down on a public health measure that many of its people wanted. And it wasn't just Togo. British American Tobacco sent a similar letter to Namibia, and one of its subsidiaries sent one to the Solomon Islands, a country with a population of 600,000.

At this point it's safe to say, if you live in an apartment with at least two other people, and you ask one of them to please smoke outside, you can look forward to a letter from a tobacco company very soon.

Oliver reasons that at this point he could get angry and call tobacco companies "assholes" or "monsters" or "open sores on Satan's dick," but he won't. But instead, he'd rather broker peace, knowing what each side clearly wants. Countries want to warn their citizens about the health risks of smoking and tobacco companies want to be able to present brand images they spent time and money to create.

So may I suggest a compromise? I present to you the new face of Marlboro, Jeff the Diseased Lung in a Cowboy Hat.

Oliver, as usual, generously offers Philip Morris free usage of Jeff for their ads and billboards. In fact, Oliver has gone one step further and started doing it for the company.

He's put up Jeff billboards in Uruguay, which people there seem to really enjoy.

Oh, and he's also made Jeff t-shirts and shipped them to Togo, where it's clearly quite a hit.

Marlboro, Jeff's already out there. All you have to do is claim him.

And anyone can tweet about Jeff the Diseased Lung in a Cowboy Hat using the hashtag #JeffWeCan to get him trending worldwide and entice PMI further. Post him on Google Plus, tag him "Marlboro" and he might even rise to the top of Google's image search for "Marlboro."

We can do this, everyone. Don't be a maybe about this.

Then Oliver introduces Jeff in the flesh, who he says is not a maybe.

What do you say, Marlboro? Let's make Jeff happen!

More like this
'Brookside' Is Coming Back & Soap Opera Fans Are Going Wild
By Sam Ramsden
6 Organizations Fighting Police Brutality That You Can Support Right Now
By Syeda Khaula Saad and JR Thorpe
Kim Petras Just Made Grammy History
By Jake Viswanath
42 Black Owned Fashion & Beauty Brands To Support Today & Always
By Mekita Rivas, Shea Simmons, Kui Mwai and Dominique Norman
Get Even More From Bustle — Sign Up For The Newsletter
From hair trends to relationship advice, our daily newsletter has everything you need to sound like a person who’s on TikTok, even if you aren’t.