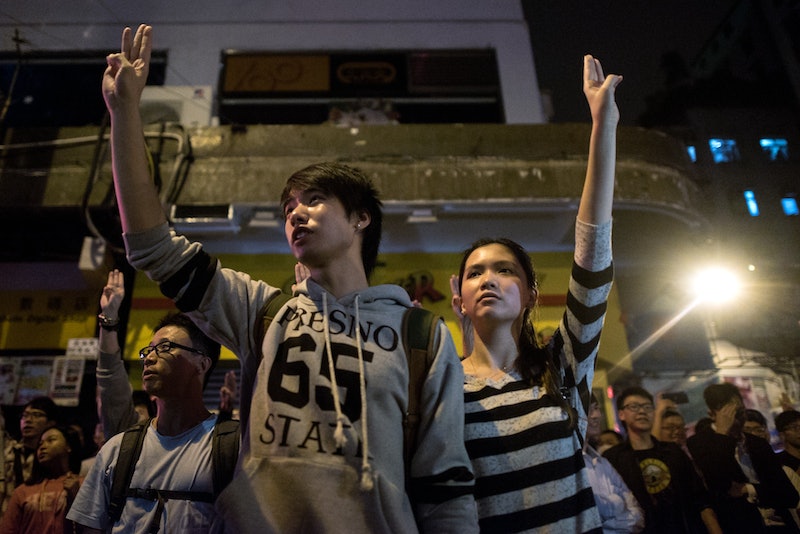 Just because we young adult literature fans feel like we constantly have to defend our devotion to our favorite books doesn't mean we can't poke a little fun at ourselves, too. And now we have the perfect parody Twitter account, Dystopian YA Novel, to do just that. Dystopian YA Novel at the handle @DystopianYA recreates a young adult book 140 characters at the time, hitting on all the popular tropes and themes of the genre.

The Dystopian YA Novel account is brought to you by Dana Schwartz, the freelance writer behind the glorious Guy In Your MFA account. (Writers: Follow that one immediately if you don't already.) It takes pieces of all of our favorite dystopian stories — The Hunger Games, Divergent, Lauren Oliver's Delirium, Kiera Cass' The Selection, and Joelle Carbonneau's The Testing , among others — and melds them together in one epic tale filled with tests, love interests, factions, rebellions, and names that sound like they could be Gywneth Paltrow's next child's name.

And you guys, it's really funny. And like the best satire, it's completely on point. From the first @DystopianYA tweet to its current place in the story, you can tell it's created by someone that knows their young adult stuff. Take for example, the tweet that kicks off the whole story:

Categories, factions, divisions — whatever you want to call them, these groups are the basis of so many great dystopian novels. Whether you're on Team Dauntless from Divergent, in District 12 from The Hunger Games, or The Colonies from Marie Lu's Legend, you know how it works. And then, we are introduced to our heroine.

Valentine Neverwoods joins Katniss Everdeen, Malencia Vale, America Singer, Clary Fray, Blue Sargent, and other YA protagonists with names that partly make me jealous because my name is kind of plain Jane and partly make me wonder if I'd be able to stop laughing if they were introduced to me in real life.

And then of course there's the sister (*cough* Prim, and a hundred others) that our heroine Valentine would just do anything to save.

And we learn that Val has never ventured far beyond her home before.

But now Val has to participate in The Test to see where she fits in society.

And it turns out, she doesn't quite fit at all. (Divergent! Divergent!)

Without spoiling, of course there's a love triangle.

#TeamLysander! And like most Disney movies, the protagonists parents are dead, but they have left important skills behind.

And of course, there are best friends involved, too:

But seriously, what is with the food-related color similes? And following along with another frustrating trope is the clumsy but lovable heroine.

But despite her flaws, you know Val is ready to stick it to the man.

Really this whole account deserves a big, fat one of these:

The story isn't over yet, so head over to @DystopianYA and see how it all turns out for Valentine and her feuding men. I have to say though, guys. I'm a little bit worried about the fate of Harpa...