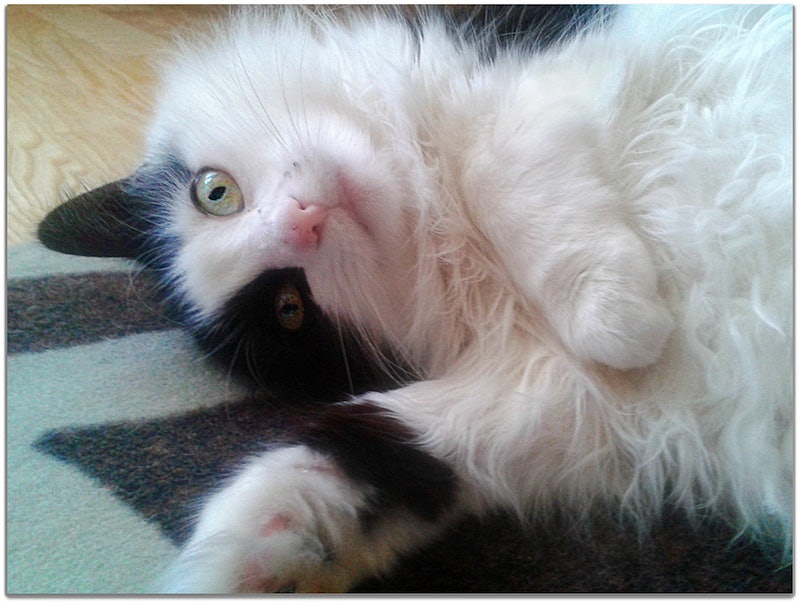 Valentine's Day may be over and done, but that doesn't mean you have to stop saying “I love you” to the ones you care about — and that includes your cat. After all, cats have a lot of ways they say “I love you” every day. Don't know what they are? No worries — YouTube cats Cole and Marmalade are here to help with their latest video, fittingly titled, “How Cats Say 'I Love You.'” Awwww!

The video walks us through a wide variety of behaviors cats exhibit in order to express affection for their humans. Sure, some of them are kind of annoying — but it's nice to know that your feline buddy isn't, y'know, ripping up the upholstery of your favorite armchair just for the hell of it. As I write this, one of my own cats is curled up underneath the blanket on the couch (she likes to do that when it's cold outside — I think she likes how warm and toasty it is under there), sleeping and snoring; it's adorable, even though I know she's going to go back to being a maniac as soon as she wakes up. Oh well. At least now I know that a lot of her weirdest habits are actually extremely odd ways of expressing her affection, right?

Here are six of my favorites; scroll down to watch the full video:

1. Flopping on Their Backs and Showing You Their Little Kitty Bellies

Note: This should not be taken as an invitation to rub their bellies. They kind of hate that. It does, however, mean that they're showing you their most vulnerable bits as a testament to how much they trust you.

2. Bonking You with Their Heads

It's called “bunting.” Cats rub their faces on everything as a way to imbue those objects with scent mark; basically, they're saying, “This thing? It is mine!” When they do that to their humans, they're proclaiming that their humans are theirs, too.

The cat that's snoring beneath the blanket right now? She does this all. The time. It's really annoying (and she's completely ripped up both one arm of the couch and part of my SO's desk chair)… but I'm going to find it a lot harder to get mad at her for it now. Damn you, Internet!

4. Rubbing Their Butts on You

Nothing says “I love you” like a nice cat butt presentation. Bonus points if your cat's tail is sticking straight up while he or she does it — that's catspeak for “I'm feeling super sociable and friendly right now!”

They're taking care of you (awwww!). My younger cat also does this thing sometimes where she'll bite my hand gently, then lick it; like grooming, it's affectionate behavior, not aggressive behavior. Think of it as little kitty kisses.

What would be regarded as stalker-ish from a human is a sign of affection of the highest degree from a cat. Just be glad it's a toy and not, y'know, a dead mouse.