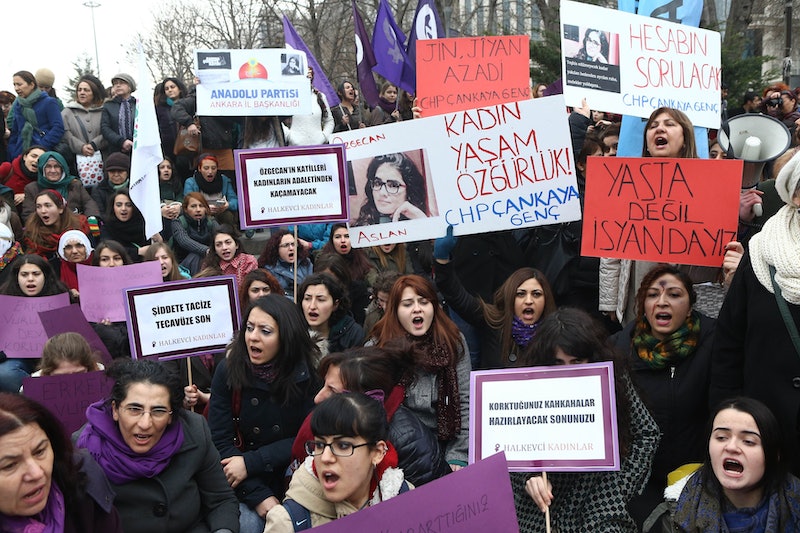 Özgecan Aslan, a 20-year-old college student, was returning home to the Turkish city of Mersin last Wednesday when she was allegedly abducted by the driver of the minibus on which she was riding. According to Turkish police, the driver attempted to rape Aslan but she resisted, reportedly fighting the 26-year-old man off with pepper spray. Aslan's burned remains were left in a riverbed, discovered nearly three days after her disappearance. Police say she was stabbed to death and bludgeoned with a pipe.

The murder and attempted rape of Aslan sparked protests across Turkey, primarily among other young women who, like Aslan, fear for their lives. Thousands of women demonstrated in the streets of Mersin, as well as the nation's largest cities of Istanbul and Ankara. They waved posters bearing Aslan's portrait and messages of solidarity, while demanding an end of violence against women.

Perhaps the most defiant protest occurred in Aslan's hometown of Mersin on Saturday when the 20-year-old was being laid to rest. According to Turkey's Hürriyet Daily News, the imam (an Islamic worship leader) at the ceremony demanded the women to remain in the back, away from Aslan's coffin. However, women at the ceremony reportedly ignored the imam's request, lifting the coffin and carrying Aslan's body through the streets themselves.

Turkish authorities say Aslan's alleged killer enlisted the help of his father and a friend to discreetly dispose of her remains. Authorities found blood stains and other forensic evidence in the minibus that Aslan rode in last Wednesday.

At her funeral on Sunday, her mother, Songül Aslan, told reporters that she hoped her daughter's killers would be tortured and executed. "Özgecan had a wonderful heart, she would work hard, help everyone. I cannot accept that she was massacred when she took a minibus to come home," Songül Aslan told reporters. "Is my daughter’s only mistake is to get on a minibus to come home?"

Turkish President Recep Tayyip Erdoğan vowed on Monday to "personally follow" the case and impending trial of Aslan's killer and his accomplices. The president called her death a "nefarious massacre" and said the three men should be given "the heaviest penalty."

Erdoğan's two daughters also visited Aslan's family over the weekend. Sümeyye Erdoğan told reporters on Saturday, via the Daily Sabah newspaper: "Our essential aim is to get these monsters punished in the most serious and effect way. We will be after this."

Here are some scenes from the ongoing demonstrations honoring the memory of Aslan and other female victims of rape and violence in Turkey...