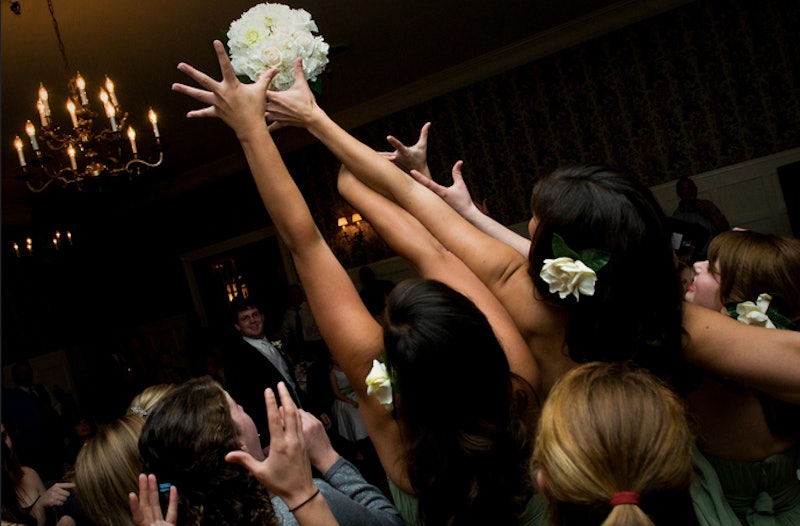 Catching the wedding bouquet is supposed to mean that you will be the next one to get married… but what happens when you catch the bouquet more than once? Nothing, of course, because this urban legend has no basis in reality — but that's not stopping one woman from using flower-catching skills for a different end: Setting the Guinness World Record for catching the most wedding bouquets. Now that's dedication, am I right?

Jamie Jackson of Utah has reportedly attended 80 to 100 weddings since 1996,during which time she has caught a whopping 46 bouquets. That means that when Jackson arrives at a wedding party, there is a 46 to 57 percent chance that she will be the one catching the coveted flower arrangement — eager bridesmaids beware! After hearing the that current world record for bridal bouquets caught stands at a measly 11, courtesy of Pennsylvania’s Stephanie Monyak, Jackson decided to submit her name for the record. She is currently in the process of collecting documentation and photos of her catches to submit to the Guinness World Records Board (whatever that is).

But here is probably what you have been asking yourselves: How did Jackson manage to catch so many bouquets? She told KSL, “My strategy is to be right up in the front because a lot of time the brides don't know how far they are going to throw it…. I've had many, many catches where I've had to jump for it. And I've hit little kids by accident." Um, hitting small children to catch the bouquet? Not something that we would suggest you do when using Jackson’s strategy at the next wedding you attend.

So while we commend Jackson for all of her efforts, here are a few do’s and don’ts of wedding bouquet catching to follow if you want to win the toss and look sane at the same time.

Just because you really want the flower arrangement doesn’t mean that you can “accidentally” break a little kid's arm.

It’s all good fun until someone gets elbowed in the face, and you don’t want to be the perpetrator. You will likely be in a crowded cluster of well-dress women; this is not an opportunity to show off your Krav Maga skills.

DON'T: Feel obligated to join the other single women on the dance floor.

If catching airborne peonies isn’t your thing, give those who have their eyes on the prize more space to do their thing.

DO: Kick off your shoes if you want to

It’s all in good fun, and I bet by this time your feet will be begging for a break anyways.

The planning that goes into finding a bag big enough for the sneakers and the timing of actually putting them on will make you seem desperate. Bringing a change of shoes just for the bouqet is simply doing way too much.

DO: Focus on having a good time

Even if you are competitive by nature, remember that the toss is meant to be a fun and lighthearted tradition. The bride and her wedding party want to see that you are enjoying yourself, whether or not you land the bouquet… so don’t get all cutthroat about it!