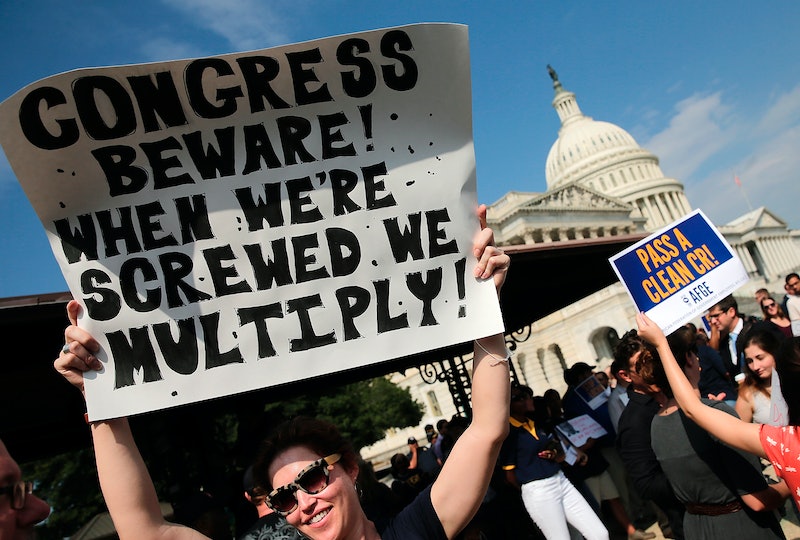 As week two of the shutdown trundles along and public disapproval of congressional legislators keeps going up, some Republicans are maintaining that failure to raise the debt ceiling won't actually be that bad — even as Senate Democrats plan a test vote on a measure that will grant President Obama the authority to raise the debt cap.

"I will hear language like, 'Well, we are heading toward the debt ceiling and you are going to default.' Anyone that says that is looking you in the eyes and lying to you, either that or they don't own a calculator," Rep. David Schweikert, R-Ariz., said Friday.

"I would dispel the rumor that is going around that you hear on every newscast, that if we don't raise the debt ceiling, we will default on our debt," echoed Sen. Tom Coburn Monday. "We won't. We'll continue to pay our interest."

But these assertions aren't doing much to help quell increasing skepticism in the public — according to a new Washington Post-ABC News poll, 51 percent "strongly" disapprove of the way Republicans in Congress are handling the budget, with a whopping 70 percent general disapproval rate. That's not to say their Democratic counterparts are doing much better — 61 percent of Americans disapprove, having risen from 56 percent before the shutdown began.

Negotiations over the budget bill have now merged with talks over the debt-limit increase, with neither one appearing to move forward. Republicans used the threat of the shutdown to try to choke the Affordable Care Act, and are now doing the same thing with the debt limit — but President Obama has said he will not compromise while the U.S. economy is being held hostage.

“We’re not going to negotiate under the threat of economic catastrophe,” Obama said during a visit to the Federal Emergency Management Agency in Washington.

Senate Democrats have said they will keep trying to push the GOP into agreeing to a long-term $1 trillion debt-limit increase, even as they plan a test vote in the next few days on a bill that would grant the President the authority to raise the debt cap. If all the Senators vote to give Obama that power, they could send the measure over to the House with a few days to spare before its mid-October deadline — putting the ball back in House Speaker John Boehner's court.

Congress has until October 17 to hash out a deal, when it'll run out of its borrowing authority and risk defaulting on it $16.7 trillion debt. Although after that the U.S. will still have roughly $30 billion in cash (as well as any tax receipts that come in on the subsequent day) the likelihood is that by October 22, the country will be unable to pay all of its bills — including benefits and salaries.

"You'll have days, not weeks, until you deplete that money and you default," said the chairman of the Council of Economic Advisers. "It's irresponsible to get to the 17th — but no, you don't fall off a cliff instantly."

As it stands, in spite of the 350,000 civilian defense workers going back to their jobs this week, over half a million federal workers remain furloughed. At the White House itself, three out of every four workers is furloughed.