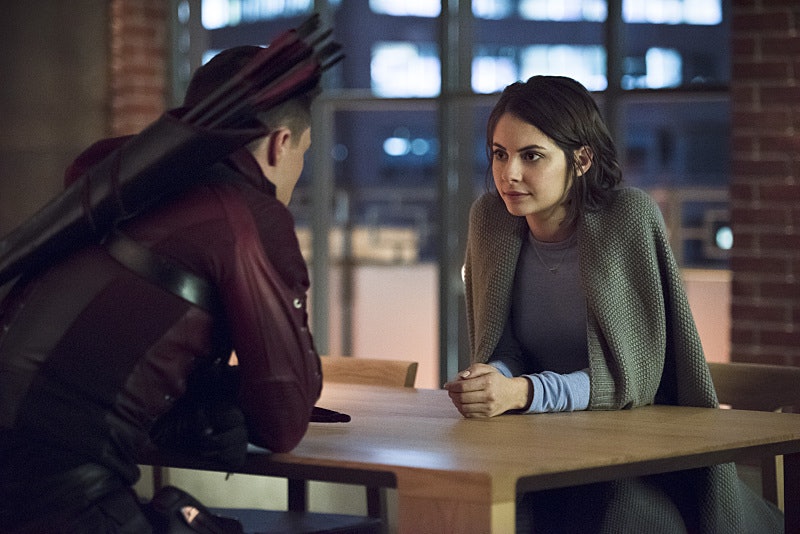 Aside from maybe Laurel, no one has gone through a bigger character transformation on Arrow than Thea Queen. Not only has Oliver's sister finally found out about her big brother's secret, but she's also become a highly trained martial arts and sword-fighting expert who could easily rival members of the League of Assassins. Oh, and not to mention the fact that she and Oliver are now trapped on the island of Lian Yu, where they'll once again come face-to-face with Deathstroke himself. Suffice to say, it's been a busy year for ole Speedy here. And as much as I'm glad to see a more honest rapport unfolding between Thea and Oliver, theirs isn't the only relationship that could end up being rekindled for the better. I'm referring, of course, to the possibility of Thea and Roy getting back together.

I mean, think about it. Their love story is far from over, especially given the way they left things in the past. It wasn't because they no longer felt "that way" towards one another. Not by a long shot. And now that they've taken some time apart to grow and discover their new identities (Roy as Arsenal and Thea as a self-sufficient woman who can kick some serious butt), it could be time for these two former flames to reconnect and start their romance anew. Because, in my opinion, this time apart was just what they needed to make their relationship stronger than ever. And here's why…

They Can Finally Trust Each Other

One of the biggest problems in their relationship before was that Roy didn't feel he could be honest with Thea about everything that was going on with him. Back then, she still didn't know about Oliver, so he would do everything he could to prevent her from a.) finding out, and b.) being put in danger. Now that she knows the truth and has some combat training of her own, Roy is already starting to view her as more of an equal and treat her like an actual member of Team Arrow. He's quick to include her in important conversations and defends her right to know about what's going on. I'm sure he'd still try to protect her from harm, of course, however, it has more of a partnership feel to it rather than a damsel in distress one. And I am ALL about it.

They Have Eyes For No One Else

Roy has never expressed any interest in any other girl that was not Thea (awww!!!), and we all saw how well Thea's relationship with Chase went (in other words, not well at all). So clearly this has to be some sort of sign that they're meant for each other, right? And, I mean, come on — who could not fall in love with that face?

Well, OK, technically she didn't come right out and say it was definitely going to happen. However, she did say to BuddyTV back in October that even if Thea and Roy don't get back together right away, "there's definitely that hope in the future." And since that was back in October and we're now in mid-February, I'd say that qualifies as being enough "in the future," don't you think? Mark my words, this 'ship is getting ready to set sail and I am so onboard.