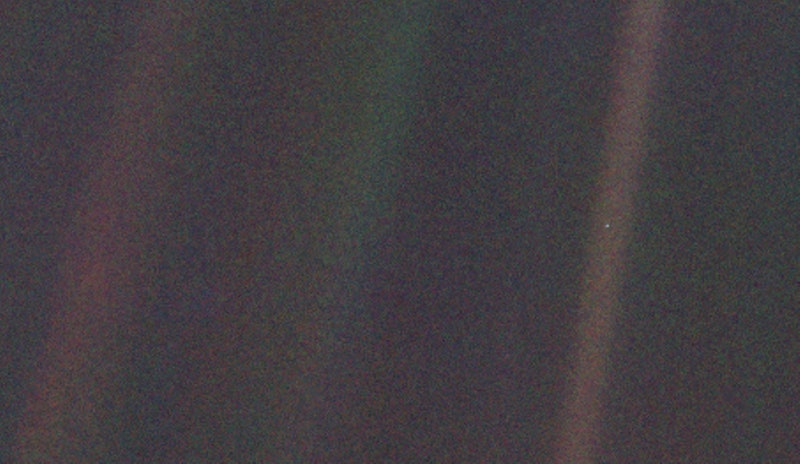 On Feb. 14, 1990, NASA scientists decided to turn the cameras of the Voyager 1 spacecraft, whose mission it was to study the outer planets, directly back on our home before it left the solar system for the last time. It wasn't on the schedule that day, but astronomer and astrophysicist Carl Sagan, who was the head of the mission's imaging team at that time, was curious and decided that it would be worth a look. This past weekend, we celebrated the 25th anniversary of what he saw: the famous "Pale Blue Dot" photograph — the tiny (and farthest) image of our earth as seen from the outer limits of our solar system.

At the moment the image was captured, Voyager 1 was nearly 4 billion miles from the sun and around 3.7 billion miles from the earth itself. It had taken the spacecraft only 13 years to traverse the inner rings of our solar system. In the photo, the earth appeared at only 0.12 pixels across, an insignificant dot in a vast, black ocean of space. The Voyager team was also able to take a final "family photo" — beautiful (albeit blurry) images of Venus, Jupiter, Saturn, Uranus and Neptune (according to NASA's Jet Propulsion Laboratory (JPL) in Pasadena, Calif., Mercury's proximity to the sun made it impossible to capture, Mars simply didn't have enough sunlight, and Pluto wasn't bright enough to photograph effectively).

"Twenty-five years ago, Voyager 1 looked back toward Earth and saw a 'pale blue dot,' an image that continues to inspire wonderment about the spot we call home," said current Voyager project scientist Ed Stone in a statement on Feb. 13. "After taking these images in 1990, we began our interstellar mission. We had no idea how long the spacecraft would last."

In the last two decades, Voyager 1 has managed to travel to a distance of around 130 astronomical units from earth — that's about 12 billion miles — and in 2012, the 1,500-pound spacecraft entered interstellar space. Traveling through the space between the stars, where matter from early star deaths is scattered, Voyager 1 continues to transmit faint signals from time to time. Once it passes through the Oort Cloud, the icy shell that encapsulates our solar system, there's no telling what sorts of curiosities it will stumble upon — and it's unlikely that we'll ever find out.

Although it doesn't seem that far off, considering the great lengths that the Voyager 1 probe has traveled, it would most likely take hundreds of years to reach the edge of the Oort Cloud, which may extend as far as half-way to the nearest star, Alpha Centauri, which is already trillions of miles away. In any case, it's more likely that the probe would run out of power in the next 10 years, leaving it suspended in the space between spaces.

In its journey through the outer limits of our solar system, Voyager 1 has captured a mountain of incredible images and data — from the up-close photographs of Jupiter's Great Red Spot, to the breathtaking images of Saturn's icy rings, to the distant, shadowy photographs of Uranus, Neptune and their respective moons, to the final, farewell photographs snapped before the Voyager 1 probe left our home solar system, the spacecraft has not failed in its mission.

Sagan, in his effort to put into words the magnitude and insignificance of that tiny image of earth, may have put it best in his book, aptly titled The Pale Blue Dot:

Look again at that dot. That's here. That's home. That's us. On it everyone you love, everyone you know, everyone you ever heard of, every human being who ever was, lived out their lives. The aggregate of our joy and suffering, thousands of confident religions, ideologies, and economic doctrines, every hunter and forager, every hero and coward, every creator and destroyer of civilization, every king and peasant, every young couple in love, every mother and father, hopeful child, inventor and explorer, every teacher of morals, every corrupt politician, every "superstar," every "supreme leader," every saint and sinner in the history of our species lived there--on a mote of dust suspended in a sunbeam.