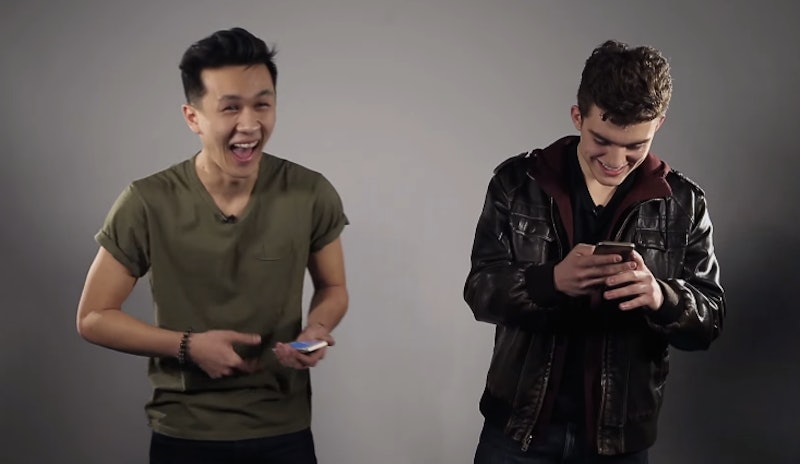 We are all acutely aware how endlessly weird we are as individual people. On our own, without any help from anyone, we're basically complete freaks. But when two of us join forces in a relationship, often that weirdness exponentially. Personally, I think this weirdness is awesome—especially as it continues to develop and mature in long-term romantic relationships. Over time, the two of you might end up creating your own unique set of bedtime prep rituals, or develop code words for letting the other know you're hungry or ready to leave a party; Perhaps you'll eventually craft your very own bizarre dance moves, performed exclusively in the privacy of your home. Couples, the point is, are endless bastions of weirdness. And in no other place is that unique, private weirdness more visible than in the text records between two people in a relationship. The person someone appears to be to the rest of the world is never exactly who they are with the person they're dating, which makes reading the texts between two people a strangely intrusive, foreign journey, even if you know one or both of the people well. To read a couple's texts is basically to insert yourself into their world—and even if you have, or have had in the past, a similar world with someone else, it's still all kinds of odd, hilarious, and awkward when it's someone else.

With all of that in mind, this video features pairs of bro-friends challenged to swap cell phones and read aloud conversations between the other dude and his partner. There's some reasonable hesitation before the actual switch, but as soon as the sharing starts, so does the adorable ridiculousness. Like the couple who (probably) uses the phrase "exercise" as thinly-veiled jargon for "boning"? I like them. Let's ignore the suggested trust violation and focus on the hilarity of our universal, secret quirks.