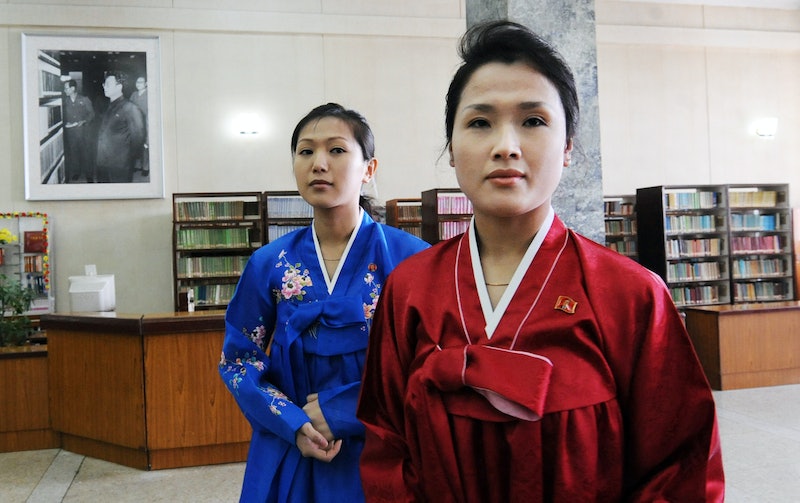 North Korea remains a mystery to the rest of the world in many ways, and its closed borders make it increasingly hard to know exactly what life is like for the people, especially women. According to a recent column originally from NKNews.org and adapted for The Guardian by North Korean defector Je Son Lee, North Korea remains a very patriarchal society. But what exactly does that mean for women in the country?

Because the Worker's Party of Korea (WPK) wants men to go to work early in the morning, women must take care of all household duties, even if she works, too. It is the man's duty to make sure his wife and family obey the WPK's policies, essentially teaching them right from wrong, Lee writes. Men are meant to keep their public and personal lives separate, and women shouldn't ask about their husband's public lives.

Although North Korea seemed to advocate for gender equality in the workplace early on in the 1950s, the true motive was to encourage women to work in order to rebuild the economy after the Korean War, Lee writes. Once the country was profitable again, the gender equality campaigns disappeared. Women largely work in low-echelon jobs or secretarial positions, making less than their male coworkers. According to Lee, when women get a respected job or become a high-ranking party member, people often quote an old Korean saying:

It goes ill with the house when the hen sings and the cock is silent.

Despite the highly patriarchal structure, women who defect are at risk for even worse treatment. According to the nonprofit Liberty for North Korea, women who attempt to escape often become victims of sex trafficking. Because of its proximity, many defectors escape through China, where women are often kept to work in brothels and online sex chatrooms or are sold as brides. China, especially in its rural areas, lacks marriage-aged women due to the one child policy and families' preferences to keep boys, leading to a high demand for young Korean wives. North Korean women have been sold for as little as a few hundred dollars in China.

And though the government has tight control over its people, it apparently lets some matters be taken care of on their own. Lee says in cases of domestic violence, which can often occur when the man is stressed from work, the government doesn't interfere. He writes in The Guardian:

In my hometown, I’d say domestic violence occurred on a daily basis in three out of 10 households, and less often in others.

A glimpse into the lives of North Korean women shows how big of a grip gender roles have on individuals' decisions, or lack thereof. The country is behind the rest of the Western world in many ways, but gender equality might be one of the most daunting.