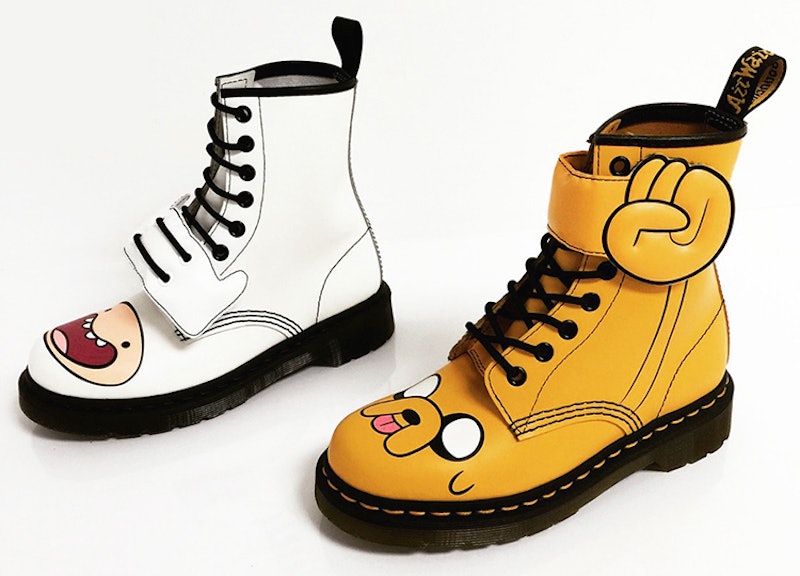 If there's ever been a pair of boots that has remained relevant year after year, against all odds, it's probably Dr. Marten'ss. They're big, clunky, and generally not aesthetically 'beautiful,' but despite (or because) of all of that, they've stuck around and been a high fashion staple through and through. Whether or not you own a pair, it's impossible not to recognize them and only slightly less impossible not to love them. In general, Dr. Martens are just awesome, but now there's about to be a very specific line of Dr. Martens if your taste is a little more...particular. Dr. Martens and Adventure Time are collaborating for a new spring 2015 collection.

The new collection will be available for both men and women (Dr. Marten's pretty much go with everything and are for everyone, so this makes sense), and will debut boots that feature characters from the show. It's all pretty straight forward, and very, very fun. Of course, the collection isn't going to be for everyone. It's a very, very specific collaboration, but often those are the lines that are the most successful. And when it comes to Dr. Marten's, which are about as basic (and awesome) as it gets, combining them with such a specific show with a cult following is a pretty brilliant move.

The Dr. Marten's x Adventure Time collaborative line is available for pre-order via Solestruck, and will be online and in stores everywhere as of March 3.