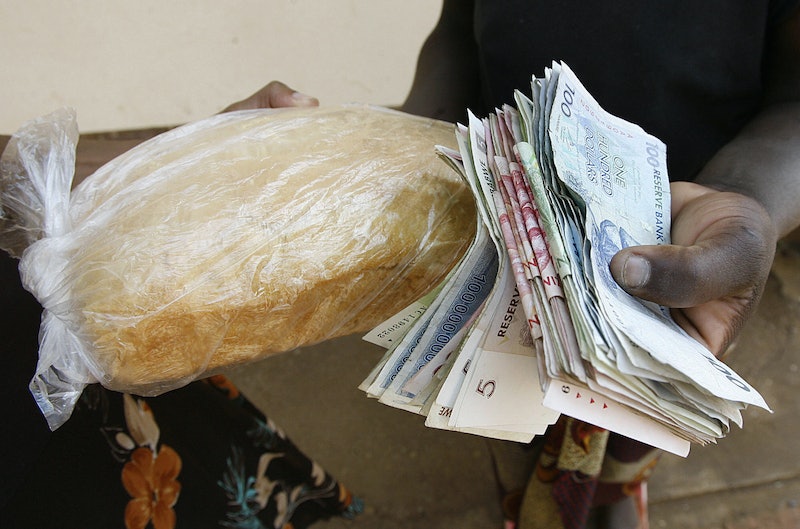 Some time down the road of adulthood, we begin to plan and save for retirement, in an effort to finally fulfill that lifelong dream of lounging on the porch of a houseboat in the middle of the Pacific Ocean, drink in hand and fresh oyster in mouth, far beyond the reach of pesky nations' laws. Well, OK, that might just be my post-retirement dream life, but sooner or later the majority of us — sometimes reluctantly, like me — save diligently for future goals. But for the people of Zimbabwe, decades of saving ultimately resulted in the paltriest of sums — Zimbabweans will receive $5 for pensions and life savings as the bankrupt government attempts to compensate its citizens after abandoning the Zimbabwean dollar in 2009.

The country's central bank said this week that it would reimburse the meager amount to those who held bank accounts and pensions in the former Zimbabwean currency when hyper-inflation destroyed the value of its dollar. The bank's governor John Mangudya said last week that the defunct currency will be demonetized by June 30, adding:

This will bring finality to this long-outstanding government obligation to the banking public. The reality of the economy is that all the fundamentals or indicators are too weak to even contemplate the return of the local currency.

It is a gross injustice. I certainly lost my life's savings, my pension. If I wasn't still working today I would be destitute — but I can't retire.

The country's sorry economic state is largely pinned on Gideon Gono, President Robert Mugabe's friend and personal banker, who was also governor of the central bank at the height of hyper-inflation. Fueling the collapse of Zimbabwe's economy, Gono depleted the treasury's foreign currency, confiscated millions of export earnings from private and corporate bank accounts, and relentlessly printed tons of already-worthless dollars, reported The Telegraph.

At its peak, the inflation rate hit 80 billion percent — or, to put in more understandable terms, the cost of local beer doubled every hour, according to the British paper. Today, goods and services in Zimbabwe, a country whose per capita GDP is the third lowest in the world at $600, costs as much of that in New York City, one of the most expensive places on Earth.