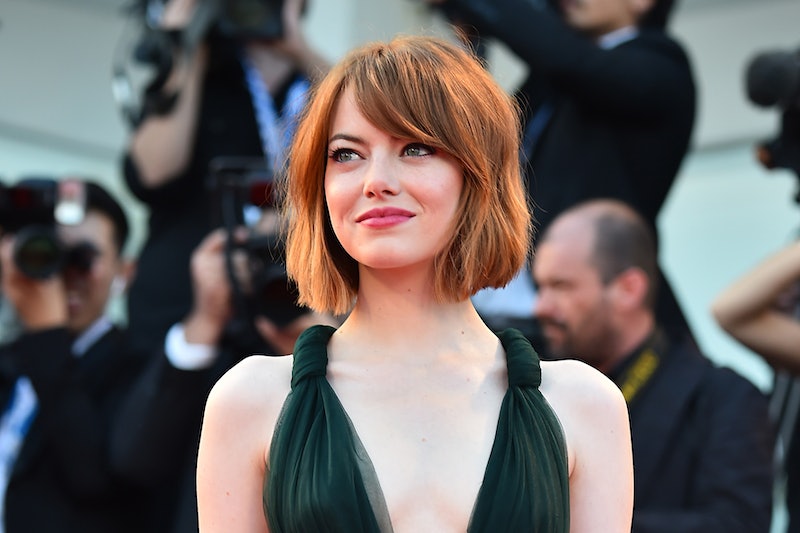 Sunday night saw hordes of the cast and crew of forty years of Saturday Night Live celebrating the legacy of the show. They also brought along with them some non-SNLers to help pay homage to their history of legendary comedians — including Emma Stone as Gilda Radner's Roseanne Roseannadanna. Seeing Stone don Radner's memorable wig was both a highlight of the night and a reminder of what should be — namely, that Stone should be doing a lot more comedy than she is.

Stone's been kicking ass this year, making her Broadway debut as Sally Bowles in Cabaret and scoring her first Oscar nomination for her role in Birdman. And I gotta say, drama is working for her. And far be it from me to tell Emma Stone what to do. But girl's got comedic talents and an obvious love for the comedy world, and I can't help but dream of a world in which she's flexing those on the regular.

There was a rumor that Stone was up for a role in Ghostbusters, and though I'm happy with the lineup Paul Feig chose for the film, I still yearn for what might have been. But to be more productive about it, I'll turn my attention now from what might have been to what I'd like to see happen going forward. I have a feeling we're still near the beginnings of a long career for Stone, so it's not like there won't be ebbs and flows in her comedy future.

Everything from Superbad to Easy A to, heck, even The House Bunny has proven that she's got the chops, especially when dealing with a good script and a good director. And she's got a kind of easy charm about her, the kind that's built in and could just as easily lend itself to a raucous comedic lead as it could a character-actor supporting role.

Seriously, picture a future in which Stone stars in some of the following and tell me it wouldn't be awesome:

Pair her with practically any of her fellow Hollywood funny ladies and a solid script-director combo a la The Heat and you've got yourself gold.

Think Bridesmaids. Throw her in with a whole pack of other hilarious women and a female-centric story and just let it happen. (Can you tell I just really want her to star in a Paul Feig movie?)

Stone rocked Easy A and her supporting part in Crazy Stupid Love, and it's time to lob her a firecracker script worthy of another starring turn. The romantic comedy isn't dead, it's simply hibernating — give her something like Obvious Child, something subversive but deep and hilarious, something with a lot to bite into, and she could drag this genre back into the limelight.

This one's a lot more commitment, but hear me out: Think of a world wherein Emma Stone stars in a Parks and Rec-level delightful sitcom. I would like that world. Keep it in mind, Emma.