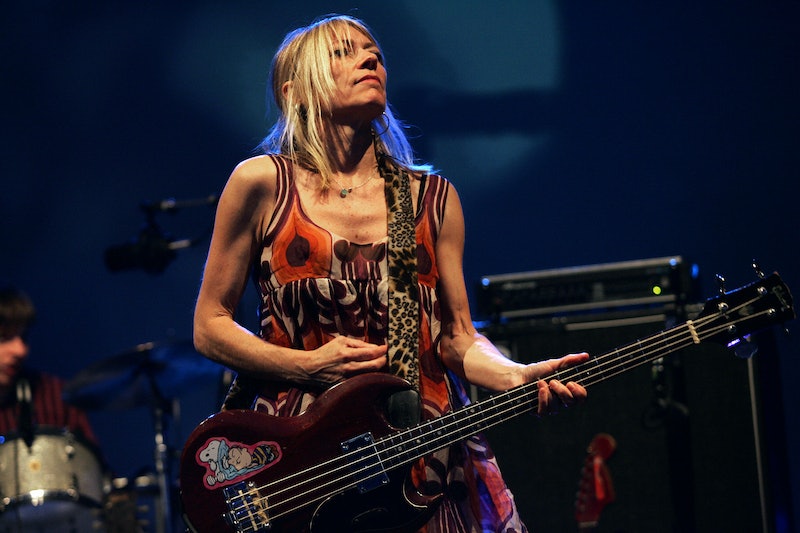 You know of Kim Gordon from her days in Sonic Youth... but when you really think about it, Kim Gordon has stayed relatively off the radar, and kept her secrets pretty hush-hush.

On February 24, you're about to find out everything she's willing to tell as she releases her highly anticipated memoir, Girl in a Band . Through her intensely personal stories and musings, Gordon thoughtfully draws the reader into her world and treats her as a close friend. Standing in stark contrast to her typically guarded persona, Gordon's uninhibited writing is a cause for celebration. In addition to admiring Gordon for being a feminist role model in the worlds of music, fashion, and art, fans can now personally identify with Gordon through her stories.

The book is, simply, everything her fans could possibly want. And if you're running out now to get it, I totally don't blame you.

Shedding new light on her break-up with husband and Sonic Youth-bandmate Thurston Moore (yes, we're all kind of still heartbroken, too), as well as her upbringing in California, and Sonic Youth’s lengthy career, Girl In a Band is not only a must-read for Sonic Youth fans, but for anyone that has ever admired Gordon’s natural inclination to not compromise her ideals to overly sexualized mainstream music, intrusive music journalists, and the struggle of wanting to create meaningful art.

Here are Kim Gordon 15 quotes that will tide you over until you get your hands on Girl In a Band — or that you may just want to paste up on your wall:

On the end of her marriage to Thurston Moore:

“The couple everyone believed was golden and normal and eternally intact, who gave younger musicians hope they could outlast a crazy rock-and-roll world, was now just another cliché of middle-aged relationship failure—a male midlife crisis, another woman, a double life.”

On the last show Sonic Youth ever played:

“My about-to-be ex-husband and I faced that mass of bobbing wet Brazilians, our voices together spell-checking the old words, and for me it was a staccato soundtrack of surreal raw energy and anger and pain: Hit it. Hit it. Hit it. I don’t think I had ever felt so alone in my whole life.”

“Now that I no longer live in New York, I don’t know if I could ever move back. All that young-girl idealism is someone else’s now. That city I know doesn’t exist anymore, and it’s more alive in my head that it is when I’m there.”

On having no formal musical training:

“I sometimes think of myself as a lowercase rock star."

On growing up in Los Angeles:

“I’ve always felt there’s something genetically instilled and inbred in Californians—that California is a place of death, a place people are drawn to because they don’t realize deep down they’re actually afraid of what they want. It’s new, and they’re escaping their histories while at the same time moving headlong toward their own extinctions.”

On knowing she wanted to be an artist from a young age:

“I sometimes think we know on some level the person we’re going to be in our life, that if we pay attention, we can piece out that information. I find it strange when people don’t know what they want to do in life.”

“When I first drove down the Hudson Parkway it was bumpy and nerve-wracking, as if your car was being shot from a pinball machine down a slope into some rough forest. It was all unknown and possibility.”

“Distance mattered in male friendships. One on one, men often had little to say to one another. They found some closeness by focusing on a third thing that wasn’t them: music, video games, golf, women. Male friendships were triangular in shape, and that allowed two men some version of intimacy.”

On performing music for the first time:

“At the same time I felt as if something new was lodging in my brain. Mixed in with the nerves was another sensation, as if I were a kid on a high-altitude ride I’d never had a ticket to go on before.”

On getting to know Moore:

“He had a glow about him I liked, and he also seemed extremely sure about what he wanted and how to get it, though it was more a quiet self-confidence than anything brash.”

On the early days of Sonic Youth:

“The lyrics were random. All of us, I remember, wrote down lines on a piece of paper, and when it came time to overdub the vocal, I randomly cherry-picked from the list. It’s a way of working I sometimes still use.”

On meeting Kurt Cobain for the first time:

“He had big, watery eyes, slightly hunted looking. I’m not sure why, but I felt an immediate kinship with him, one of those mutual I-can-tell-you-are-a-super-sensitive-and-emotional-person-too sorts of connections.”

“This is how I know I’m old, because today I have a very real intolerance for crappy, ugly, badly lit dressing rooms and dilapidated toilets. At a certain age, your brain just says, No.”

On her daughter Coco’s wariness of living in the shadow of her parents:

“‘You don’t know what it’s like to be your daughter,’ Coco said more than once, and it was true, we didn’t, mostly because I never thought of Sonic Youth as being that well-known.”

On her new band Body/Head:

“The best kind of music comes when you’re being intuitive, unconscious of your body, in some ways losing your mind: the Body/Head dynamic.”

More like this
Craig David Is Still Slicker Than Your Average
By Olivia-Anne Cleary
Kanye West Apologizes To Kim K "For Any Stress I Have Caused" In Rare Interview
By Jake Viswanath
Adam Levine Denies Having An Affair — But Admits He “Crossed The Line”
By Jake Viswanath and Radhika Menon
What Is A "Hot Girl Book" & Why Is Everyone Talking About Them?
By Samantha Leach
Get Even More From Bustle — Sign Up For The Newsletter