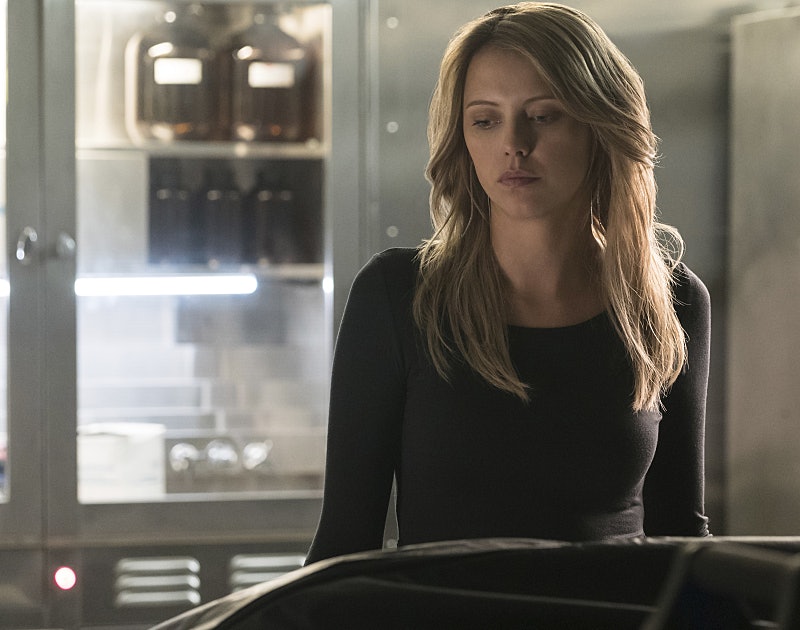 Does The Originals' latest introduction kind of give you the creeps? Well, apparently the worst is still to come for Klaus and the rest of the Original family. Dalia is coming to The Originals and it'll undoubtably push Freya into becoming Klaus' ally — even if it seems like she's sided with Finn right now. The Originals Season 2 spoilers reveal that Freya's plans might not be as evil as they seemed during last Monday's new episode. Mostly because Freya's just as terrified of what's coming as the rest of the Mikaelson siblings should be. So, maybe we've finally got Freya figured out?

Freya's only made one, very brief appearance on The Originals since she revealed herself to Rebekah and told her sister to warn their brothers that something was coming. And, in her short moment with Finn during last Monday's episode, it seemed like Freya would become yet another enemy for Klaus and his daughter. But, like I said before last Monday's episode, Freya doesn't want Klaus' baby — at least, she definitely doesn't want Hope for her own plans, unless she's protecting Klaus and Hayley's hybrid daughter from bringing Dalia to New Orleans. I mean, she is intending to make the Mikaelsons a more functional family, after all.

Now that Esther and Mikael have been pretty much neutralized, the question of who will take over as The Originals' Season 2 big bad is a big one. At first, it seemed like it might be Freya — we don't know a lot about her, except that she was raised by the Mikaelsons' very powerful aunt and she seems kind of unhinged in the same way Finn and Esther have been all season. So, it'd make sense for Freya to pose the new threat to Klaus' way of life, right? Wrong.

The Originals' executive producer, Michael Narducci, dropped a few hints about Freya's time in New Orleans to TVLine and, unfortunately, it seems like she should be the least of our worries. Narducci told the site that Freya is absolutely looking for "an alliance" with her family so that she's as powerful as possible when it comes time to take on Dalia. That definitely doesn't sound like she's a threat — even if she's playing tough and mysterious with Finn right now. According to the exec, both Freya and her siblings will do a lot of questioning whether or not an alliance is a good idea and whether or not they can trust one another. But, one thing is certain, Dalia isn't just coming for Hope if she finds her way to the Big Easy — she's also coming for her former slave, Freya, as well.

Which, obviously, makes Freya not the enemy that she seemed to be during last Monday's episode. If Dalia comes to town and, let's face it, Dalia is definitely coming to town — the only scenario that would make sense for Freya would be to stand beside her family rather than fight against them. She's obviously a powerful witch as well, but she's definitely no match for what's coming on her own. Freya needs the Mikaelsons' help if she's going to stay a free witch and they need her help if they have any chance of keeping Hope safe from their wacky-as-hell aunt. Basically, the least of our worries should be Freya because whatever evil is coming to New Orleans is something no one can face unless they face her together.