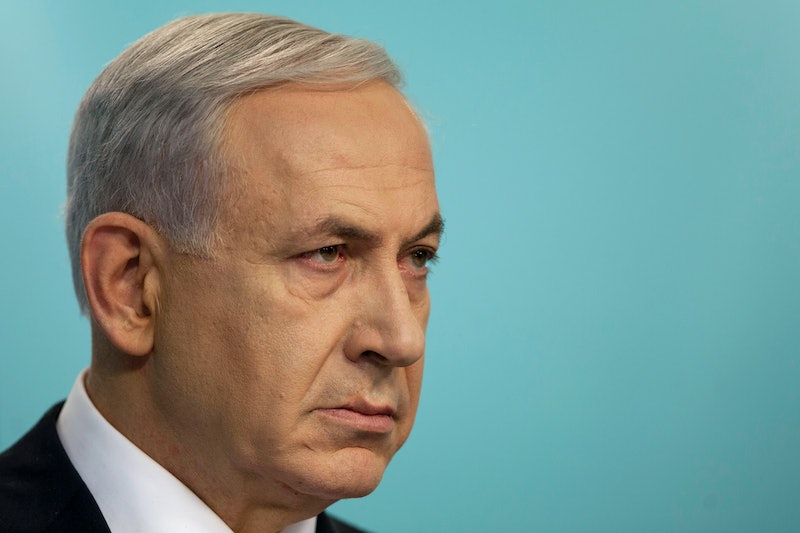 Despite the backlash of criticism he has faced, Israeli Prime Minister Benjamin "Bibi" Netanyahu's scheduled speech before both houses of Congress next month is set to go ahead anyway. But the timing of his visit, a mere two weeks before the March 17 elections in Israel, has sounded alarms in his country — so much so that the Central Election Committee is taking precautions against potential electioneering, as an election official set limits around Netanyahu's Congress speech requiring media networks broadcasting the event to allow a five-minute delay for editors to remove statements that are deemed partisan.

Following opposition back home for its proximity to Israeli elections, election chief and Supreme Court Justice Salim Joubran handed down the delay requirement, noting that his decision was binding for all TV and radio stations, and will be enforced. According to Reuters, Joubran said in a statement:

Editors-in-chief of broadcast channels will watch and make sure that nothing the prime minister says can be construed as election campaigning. Any campaigning will be omitted from the broadcast.

The decision is a compromise of sorts between members of opposition parties who want to ban broadcasting the speech in Israel and Netanyahu supporters who are adamant that the speech is solely to voice Israel's opinion on the U.S.-Iran negotiations, which it opposes.

Though the official goal of Netanyahu's visit is to warn Congress of the dangers of Iran — pending the Obama administration's ongoing nuclear talks with the Middle Eastern country — it has angered U.S. lawmakers and the media for his agreeing to House Speaker John Boehner's invitation, extended behind the administration's back, in what is being seen as an attempt to exploit partisan politics in D.C. President Obama, along with a whole host of prominent Democratic politicians, have said they will neither meet Netanyahu nor attend the speech.

But it has also raised concerns among many in Israel — and not merely for how close it will take place to the elections. At a memorial honoring the late Prime Minister Ariel Sharon last month, former Israeli President Shimon Peres admonished Netanyahu for his upcoming visit. Peres said:

Bibi can make speeches at any place or date, but when the President of the United States asks him not to come before elections, he must respect that request.

Former Israeli ambassador Michael Oren has also publicly chastised the incident — though for more calculated reasons — calling on Netanyahu to cancel the speech:

[It] created the impression of a cynical political move, and it could hurt our attempts to act against Iran. It's advisable to cancel the speech to Congress so as not to cause a rift with the American government. Much responsibility and reasoned political behavior are needed to guard interests in the White House.

Perhaps most importantly, the Israeli public considers both a loss of bipartisan support in D.C. and a nuclear-armed Iran almost equally severe, topping their list of serious threats, reported The New York Times. Yehuda Ben Meir, a public opinion expert at the Institute for National Security Studies in Tel Aviv, told the Times :

Most people in Israel feel or think or believe that mainly this was done for internal political reasons. His base may say he went because of the Iranian issue, but those swing voters — and what’s important is always the swing vote — it could among certain parts of the electorate harm him. It might be that he didn’t properly estimate the fallout.