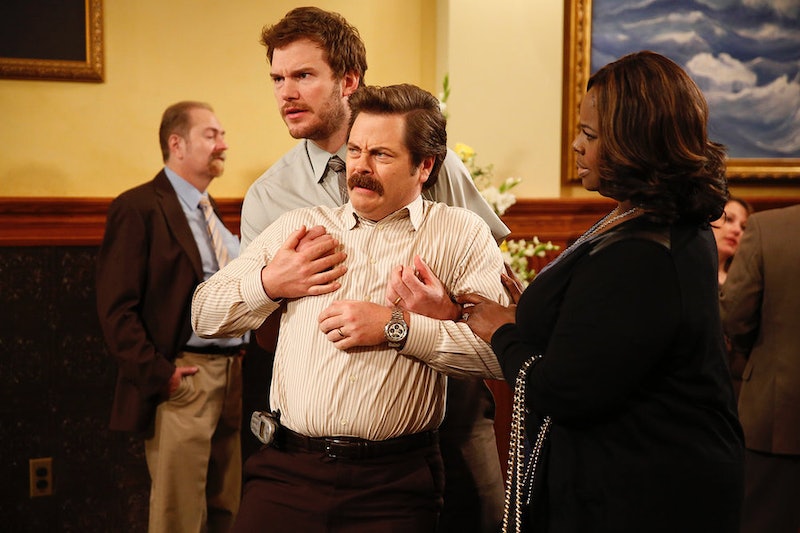 It's almost over, you guys. Parks and Recreation is frighteningly close to leaving us, with the series finale airing on Feb. 24, and having to say goodbye is going to seriously suck. I mean, can we really live in a world where Leslie Knope is no longer sharing her journey to the White House with us on a weekly basis? Can we really enjoy our bacon and eggs without the comfort of knowing how proud Ron Swanson would be? Can we complain about hating everything without imagining the grumpy cat-like expression on April Ludgate's face? Sure, there's Netflix and we can forever binge on reruns, but it's just not the same. And Tuesday night's new episode isn't going to be easy to handle either, I reckon. The title of Parks and Rec this week is "Two Funerals," so you're probably about to feel all the feels.

Two funerals mean two deaths, obviously. Since this is the final season, in TV rules, that means all bets are off on who could die. However, this is a feel-good sitcom so I doubt any of our favorites will kick the bucket. But since we won't know for sure until the episode airs, here are some educated guesses as to who will croak.

Someone Close To Ron

The TV Guide episode description reads: "Leslie helps Tom prepare for a big evening; Donna and Andy assist Ron with a life change," so it seems like Ron will be directly affected by at least one of the deaths. For him to be impacted more than the others, it needs to be someone close to only him. His mom (the OG Tammy) has only made a brief appearance on the show and seems to live her life similarly to her son.

If Ron's mother is one of the characters to die, how would he handle it? This could actually make for a very interesting, emotional episode.

One Of The Tammys

Of course, the other two Tammys were also once very close to Ron. He has spent a lot of time wishing death and eternity in hell on his ex wives, but what if one of them really did die? Would he truly celebrate? Or would it royally mess with his head? Something tells me that even if it were one of the Tammys, she would pop out of the casket at the last second and give Ron a very terrifying surprise.

The CEO of Sweetums and former pageant queen has all the money anyone could ever need. But mo' money, mo' problems, so maybe her excessive wealth came back to somehow hurt her? That would also mean that Bobby Newport would return, and let's face it, Pawnee just needs more Paul Rudd.

This would be really sad, and I don't want it to be an option, but if Tom is planning for a big evening (as the episode description indicates), could the second death hit Tom the hardest? Unless it's Papa Saperstein, which in that case, I don't think Tom would be too upset.

JJ was just at the center of an episode, which could be setting up his loss. If the owner of JJ's Diner passed away, the whole town would be devastated, but I think it would hit Leslie and Ron the hardest. Where would Leslie stuff her face with waffles? Where would Ron eat all the bacon and eggs? Despite the massive loss, the crew would certainly honor JJ's legacy appropriately.