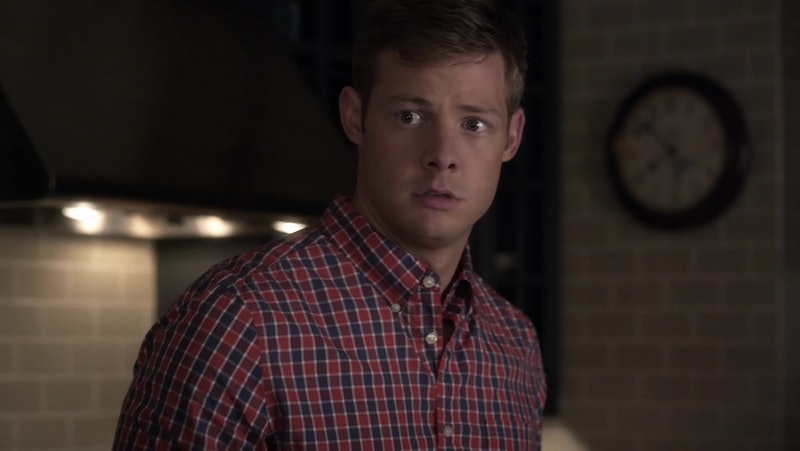 Does anyone else find it a bit fishy that suddenly three out of the four little liars of Pretty Little Liars have brand new love interests? Emily has Talia, the (married!!) caterer, Spencer's got Jonny, the eccentric artist, and Aria might have something brewing with Andrew Campbell the genius decathlete — and all three new flirtations are varying levels of sketchy. I mean, none of these guys strike me as particularly trustworthy, but I'm particularly wary of Andrew, who we haven't seen in a while. (Remember him? He had a thing for Spencer, and things decidedly did not end well — she got him to give her Adderall, and... well, you all know what happened next) Anyway, now he's back and this time he's chatting up Aria, but something just doesn't seem right. What's his game? Could Andrew be another "A" minion? Big A? Or just an innocent bystander?

It is kind of suspicious... how many people would catch someone cheating off of their test and offer to tutor them in subjects across the board? I mean, I get that Lucy Hale is attractive, but jeez — for him to drop everything from his crazy-busy schedule to tutor a classmate who he doesn't even know particularly well is... well, weird. Add in the fact that he used to have a huge crush on one of Aria's closest friends, and he's got to have some sort of ulterior motive.

And you'd better believe I've got some theories about the guy:

Hey, it could happen — it's really anyone's game right now. Besides, as per IMDb, he will be making another couple of appearances this season, one of which happens to be the season finale. He's got to be around for some reason.

Besides, the fact that he "saved" the girls from Cyrus Petrillo only makes him more suspicious in my book. Sure, that move looks chivalrous, but what was he waiting around for? Was he spying on them? Did he know they were going to get ambushed by an angry ex-con biker? PLL is all about second-guessing your second guesses, so up is officially down, and whoever looks kind-hearted and trustworthy is probably hiding something major. Meanwhile, someone who looks as suspicious as all heck (ahem, Mike Montgomery) will probably turn out to be working on a crime novel, operating under some form of blackmail, and/or doing the whole "keep your friends close and your enemies closer" thing.

He Could Be an "A" Minion

OK, so he's probably not going to be the answer to the Big "A" reveal that's coming up in Season 6 — but that doesn't mean he has the purest of intentions. He could still be working for "A"— after all, all the girls are focused on Mike and Holbrook as the only possible "A" minions, leaving the door wide open for any of their new love interests to swoop in and don that signature black hoodie.

He Could Still Be In Love With Spencer

Heck, maybe he is just an overachieving student... with his heart set on another overachieving student. "A" or no, I still think it's suspicious that Andrew popped up again after being largely absent since Season 3. Is he just going to make things even more confusing for Spencer's love life: Things have been rocky with Toby since he got his badge, and then there's artsy Jonny who she's got a definite attraction to. Adding Andrew to the mix would make everything exponentially more confusing. He could just buddying up to Aria to get close to Spencer again. They did play strip academic decathlon together, after all, and that's a bond that never breaks.

Who even knows anymore? Maybe he left his feelings for Spencer back in the days of Season 3, and now he likes Aria, who's newly single after her breakup with Ezra (I'm not even going to pretend to be sad about that one). And really, would it be the worst thing? Aria dating a super-smart adorable guy who ensures she keeps her spot on the honor roll would be kind of great and totally possible...

...oh, who am I kidding? This is Rosewood we're talking about here.