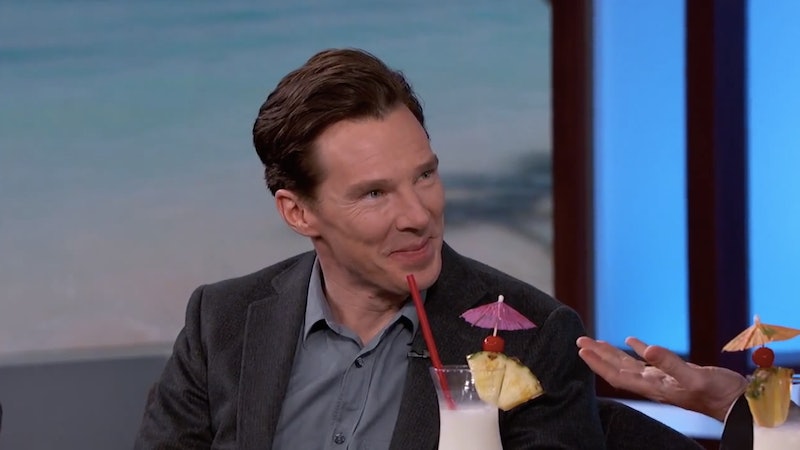 If you were Benedict Cumberbatch, star of Sherlock, potential future Oscar winner, and Tumblr prince, where would you spend your honeymoon after getting married to Sophie Hunter on Valentine's Day? If you answered with Hunter herself, you are wrong and can get out. If you answered in California with Jimmy Kimmel, then you are absolutely correct. That's right, only three days after his wedding, Cumberbatch appeared on Jimmy Kimmel Live , jokingly revealing that he felt bad for not inviting Kimmel on the honeymoon and wanted to make sure that he was included rather than canceling his appearance entirely. I mean, just because you're now a married man is no reason to start giving up on your commitments. Apparently.

Even more importantly, we got our first hint as to what the little Cumberbun is going to be called — although Kimmel couldn't resist lamenting the idea of saddling the poor child with a long name like Cumberbatch. Of course, if Cumberbatch has to be the last name, then there's still a lot of fun that can be had with that. "As long as it starts with a Q," said Kimmel. "Then the kid can be Q. Cumberbatch."

Puns aside, we now know a couple of things. The first thing is that Cumberbatch and Hunter are either having a delayed honeymoon or they had a really short one, since the Imitation Game actor flew in to California for this Kimmel appearance three days after the wedding. The second thing is that the couple has yet to settle on a baby name, except to eliminate the letter Q as a possibility for potential baby names from here on forward. Which, you know, is fair enough. Cumberbatch spoke of a great many other things during his appearance on the show Monday night, but let's be real. We all just want to know how the wedding went and what he plans to name the Cumberbaby.

Until then, we can enjoy feeling like a part of his honeymoon by sipping a piña colada and watching the clip below.