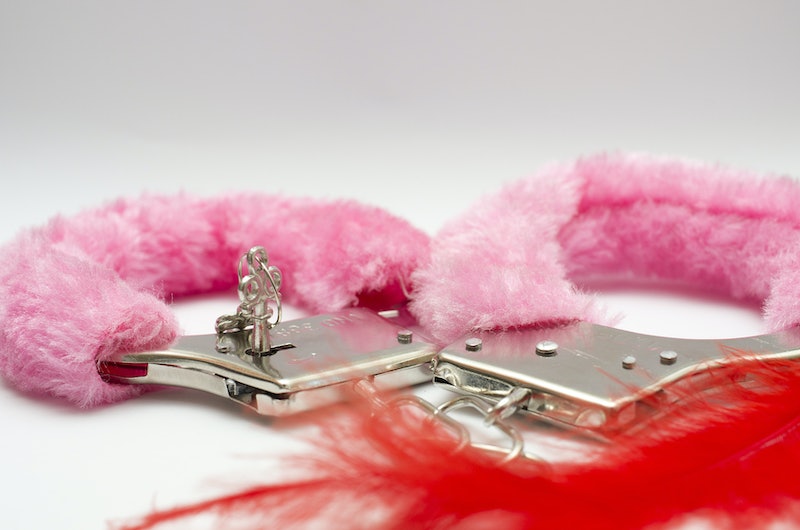 Sexual fantasies are still something of a taboo topic (despite the popularity of Fifty Shades of Grey); since the majority of adults have them, though, it's high time we start talking about them. So if you ever wondered what your sexual fantasies say about you, listen up — according to experts, here's what they might mean. Ready to get a little hot and heavy?

Rachel Keller, a graduate student studying human sexuality at Delaware's Widener University, defines sexual fantasies as "a conscious set of thoughts that contain sexual themes, acts, imagery, and/or language. In many cases, but not always, sexual fantasizing coincides with physical arousal and sexual activity." Basically, they're complex daydreams that involves sex. Often, what we fantasize about doesn't align with our values and principles and involve things that we would never really want to happen in real life; as a result, many people are still embarrassed by them. But it might be worth getting to know what does it for you in the fantasy realm — it might tell you something about yourself you might not already know. Here's a roundup of the four most common sexual fantasies for women and what they reveal about you.

Although gender stereotypes suggest otherwise, being dominant in the bedroom is the most common sexual fantasy for women. Experts speculate that this is actually due to the lack of power that women have in society, since men are often in control of our social systems. In terms of personality, if you're easy going and laid back, you're more likely to have this sort of fantasy, since it allows you to gain control.

Being a sub is also a very common fantasy for women. This type of fantasy has created controversy among sexuality and psychology experts, but the one thing everyone agrees on is that having a submissive sexual fantasy means that you probably have some control issues. In one study, socially dominant women reported enjoying fantasies of submission more than others, which actually makes a lot of sense — it can be relieving to give up power.

If you think about voyeurism while getting it on, you're probably an adrenaline junkie. It's the anxiety of being able to get caught that makes this fantasy so exciting! You also may have slightly low self-esteem or may have unresolved family conflicts, as both have been cited as part of the psychology of this fantasy.

Being seduced and ravished by someone who is your knight in shining armor is a very common sexual fantasy among women. This might be your current partner, an ex, a celebrity, a next-door-neighbor, or even a cousin. Since this fantasy usually involves idealizing, it may suggest that you need to spice up your love life or that you're not satisfied with the current state of your reality. Also, if you are in a relationship and fantasizing about someone else, it's perfectly healthy to do so and doesn't mean you're going to cheat, as many would speculate.

No matter what your fantasy is, it's important to remember that sexual fantasies are only one part of a person's sexuality and are not representative of them as a whole person. Exploring your fantasies is perfectly normal and healthy — but, as Keller reminds us, just remember not to do anything illegal or exploitative of others.

More like this
15 Ways To Tell Someone Was Just Talking Behind Your Back
By Carolyn Steber
Long Live Bennifer!
By Allie Jones
Starbucks' Summer Menu Includes A New Chocolate Cream Cold Brew
By Emma Garza
The Case For A Hard Launch Summer
By Morgan Sullivan
Get Even More From Bustle — Sign Up For The Newsletter