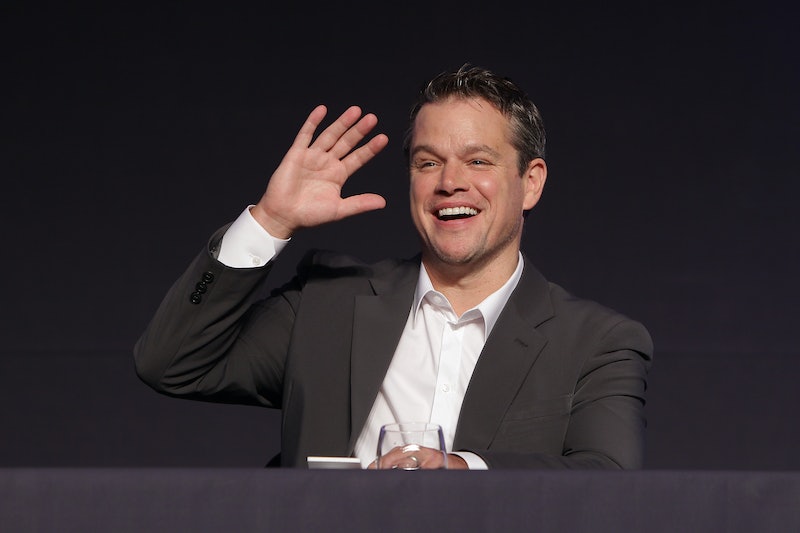 Academy award-winner Matt Damon turns 43 today, everyone! Ben Affleck's BFF and one of Boston's golden boys has officially been gracing the big and small screen for 25 years. And what a glorious 25 years it's been. Damon's played a slew of memorable characters in his quarter of a century in Hollywood, from Linus Caldwall to Private Ryan and from Jason Bourne to his role as museum curator and former director of the MET, James Rorimer, in the upcoming Monuments Men out in December.

I'm sure the real Matt Damon has very mature, fatherly plans for celebrating the big 4-3 with his wife Luciana and his daughters, but what if Matt Damon decided to be Will Hunting for today?

Here's how we think he might celebrate his big day if he were to return to his Boston stomping grounds:

"Good morning, world. It's my birthday!"

Matt/Will and Ben would go out and engage is goofy BFF birthday fun.

After spending most of the day being fun, Ben and Matt/Will go out for dinner and start partying. And maybe they'd talk about how damn successful they are and how Ben wishes Matt could play the Robin to his Batman. And talk about how their wives/parents are doing etc, etc.

They'd continue the party out at one of their favorite local spots (and meet the rest of their friends) where someone might try to suggest that celebrities shouldn't have valid opinions about world/government issues and try to ruin Matt/Will's birthday. And again, because Matt Damon/Will Hunting has great BFFs, they'd prove that person wrong. People can be so jealous and rude sometimes.

A paparazzi might try to harass the group but Matt/Will is not going to have that on his birthday since he's a little drunk from partying with his boys. He's already said that he will move his family back East if they become paparazzi targets, so he's really not interested in your shit.

They'd call it a night since it's getting late and they're not as young as they used to be, and they also need to be home to tuck in their kids. Matt Damon/Will Hunting invites his friends back to his house for a friendly poker game because he LOVES poker. The only person that wants to go is Ben because Matt/Will always wins and he's the only one that can handle it.

Basically Will Hunting loves his BFFs and so does Matt Damon, so it's only normal to assume that he'd want to spend his birthday living it up with them on his hometown streets.