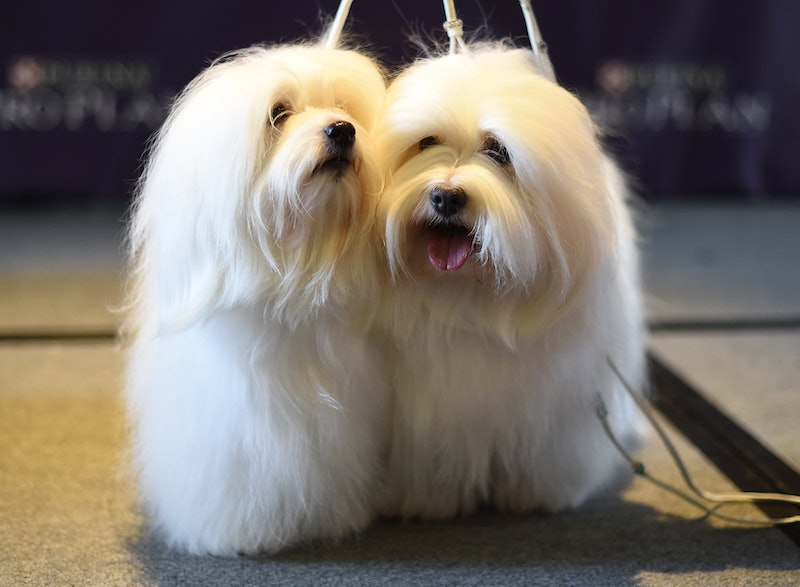 The most important red carpet event for canines has finally arrived, and it's more glamorous (and more adorable) than ever before. The 139th Annual Westminster Dog Show kicked off on February 16 and will conclude on the evening of February 17 with the group winners announced for the sporting, working, and terrier groups, followed by the final award for Best in Show. All the fanciest breeds are in attendance, with over 2,700 dogs competing for the coveted title of Best in Show. There are also two new breeds in the running this year, which are the Coton de Tulear and the Wirehaired Vizsla. But what does this boil down to for you, the non-breed-expert viewer? Adorable photos of Westminster Dog Show dogs. That's what.

The best part about this show is that there's truly a breed for everyone. Big dogs, little dogs, long hair, short hair, and whatever the Chinese Crested is considered, will be there for your oohing and awwing pleasure. Which breed will win is anyone's guess, as the past winners are so different that there's no real way to predict a winner. And also considering that the judges are not making their winner selections the same way we would – based on which one has the goofiest smile and clumsiest running style. The judges are looking at breed standards and visually measuring the specifics of coat, eyes, neck length, posture, etc. But as viewers and dog lovers, we're only here for the cuteness, so here are some of the most adorable photos from the Westminster Dog Show we've seen so far.

This is Remus In His Fanciest Cape

Matisse Has Been a Hit This Year...

...and I'm sure his face is in there somewhere.

"I'm just honored to be nominated."

And This Pup Who's Feeling Let Down

If falling in love with a face like this is wrong, then I don't wanna be right.

And The Tiny Winner of the Toy Group

Just an all around goddess and boss bitch.

"I'm thinking an up-do with a braid like Katniss, please and thank you."

And You'd Better Believe These Pups Have to WERK

There's This Guy, Who Doesn't Need To See The Finish Line To Succeed

Seriously though, how can this one see where he's going?

And OMG This Little One

Last One, Because I Literally Can't Handle The Cuteness