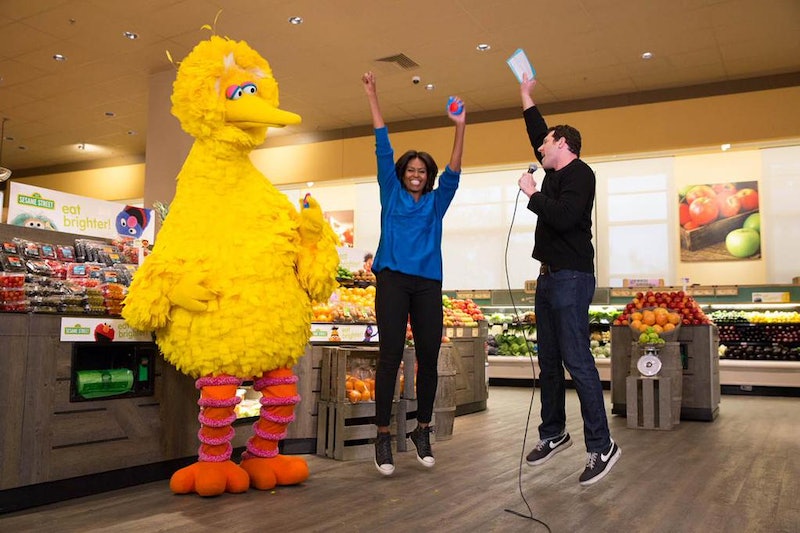 Billy Eichner managed to be on his best behavior when Michelle Obama and Big Bird were on Billy on the Street . Well, at least at first. Eichner started out the special episode with a calm and quiet voice, but quickly included his signature screaming — and in turn spooked the First Lady a few times — throughout one of the best episodes of the game show to date. In addition to the two very special guests, Eichner also brought along fan-favorite Elena, who apparently is FLOTUS' biggest fan. And better yet, he surprised her — Elena had no idea that Mrs. Obama or Big Bird would be there with her.

"It's beyond my wildest dreams, truly, that she would be a contestant on my show," Eichner revealed sincerely before barreling into pop culture questions for "Ariana Grande or Eating a Carrot?" This all came together, he explains, because "Other than texting funny GIFs, one of the First Lady's priorities has been raising awareness of healthy eating and exercise for children and parents alike." The team-up with Sesame Street and the produce industry aims to make eating fruits and veggies fun, so the whole episode took place in a Washington, D.C. grocery store. Check out seven of the best, most can't-miss moments and the full episode below.

When FLOTUS Jokes Eichner Could Get Taken Out

When Eichner accidentally pokes her in the hand, she jokes, "It's OK, but watch it — you could get shot."

When Elena Freaks Out About Meeting Michelle

"I'm gonna faint. This is the best day of my life," Elena exclaims after her blindfold comes off. She then questions if this is just an actress playing Mrs. Obama and says to Eichner, "Remember I told you I love her more than anyone?" Aww!

When Elena & Michelle Bond Over One Direction

"I like One Direction. They're so cute. I'm sorry, they're a little young," Elena says. "I wish they didn't have tattoos." FLOTUS agrees — they are very cute. I bet Elena is a fan of Louis.

When FLOTUS Slow-Dances With Big Bird

When She Pushes Eichner Around In A Grocery Cart

He is screaming Gwyneth Paltrow's Oscars acceptance speech for Shakespeare in Love at the same time.

When Michelle Says "I Am Groot"

Their Celebration & Eichner's Prize For Michelle

Their jumping-for-joy photo is at the top of the page, and obviously everyone needs a large photo of Ariana Grande's ponytail.