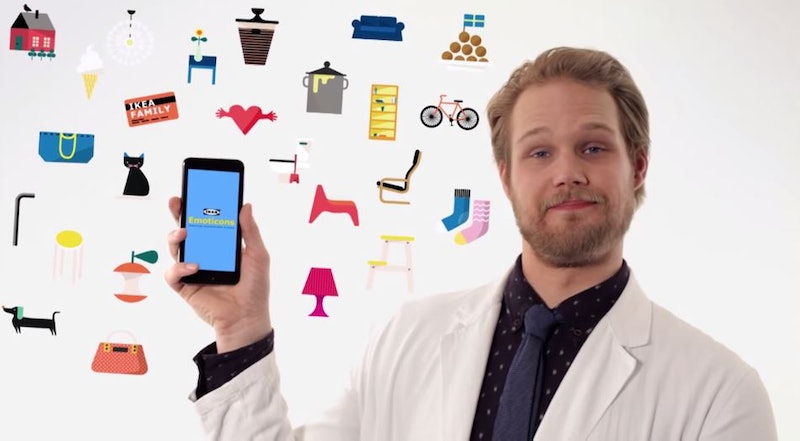 You know, I was just starting to think that maybe we'd finally seen all the novelty emoji keyboards we could possibly want… but then IKEA emoji came along, and now I'm questioning everything I thought I knew about life. Because you guys. IKEA emoji. Well, technically “IKEA emoticons” — your modern, affordable Swedish furniture has no time for Japanese portmanteau words — but still. Just, y'know… think about that one for a minute.

Have you thought about it? Good, because now we're going to delve into exactly how one should use these hilarious little pictograms. IKEA created this hilarious little app for Valentine's Day; it's free and available to download in both the iTunes App and the Google Play stores, so you can utilize them no matter what type of device you prefer. And you will want to utilize them — because I mean, who doesn't love the idea of being able to insert a BILLY bookcase into their everyday conversations? Life dream status: Accomplished. For reals.

As IKEA's hilarious promo video stresses, though, their emoji aren't just fun — they're also useful for keeping the lines of communications open between you and anyone you might live with. For example, instead of fighting over whose turn it is to clean the house…

You can simply say it with emoji:

Instead of sitting silently, staring at the television with nothing to say to each other…

You can tell your favorite people exactly how much you love them:

Because nothing says “I love you” like Swedish meatballs.

Compared to a lot of emoji keyboards, this one is actually pretty easy to use; all you need to do is install it, and it will appear right in your phone's default texting program. This allows you to toggle between your regular texting keyboard and the IKEA one without needing to open a whole 'nother app. You do still need to copy the image you want to use, then paste it into the texting field — but given that copying can be accomplished simply by tapping the image you want to use, it's pretty low-fuss. Easy-peasy, right?

IKEA's video offered plenty of ideas as to when it might be appropriate to deploy these delightful little images — but I've come up with a few more. You never know when you might need a MALM dresser, right?

Sorry, roomie. I'll clean it up.

I mean, seriously. How hard is it to put away your laundry? It'll take you five minutes, tops.

OK, yes, I realize this is an emoji of an allen wrench; as such, it may not be incredibly useful in the event of a stuck door. I think it looks kind of like a crowbar, though, so hey, at least the image is multifunctional, right?

In the words of George Takei: