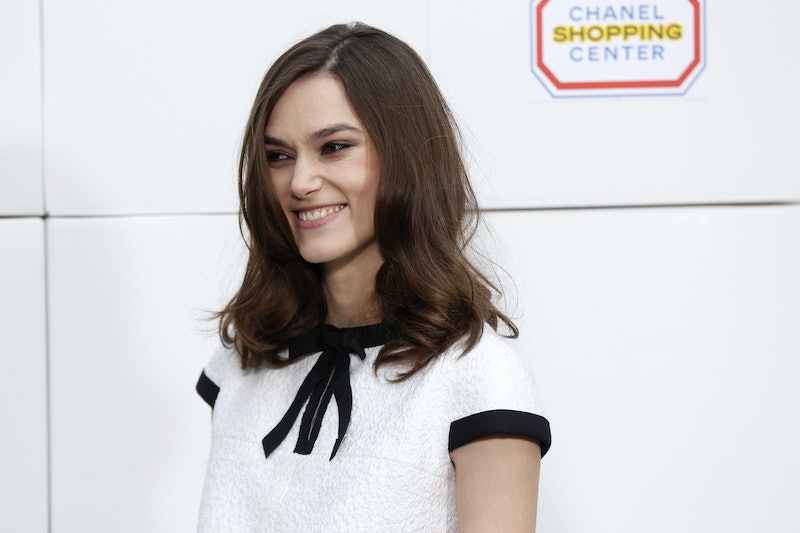 There are a lot of things Ellen DeGeneres is wonderful at, but guessing the sex of unborn celebrity babies is not one of them. How do I know this? It's been proven time and time again. Let's start at the beginning. For Tuesday's episode, the ridiculously gorgeous mom-to-be Keira Knightley stopped by DeGeneres' show to talk about her pregnancy, which seems to be going well so far. Except, you know, for not being able to drink all the free champagne she's been offered at events and stuff, and the crippling fear of having a boy, since they're known to do things like pee all over their parents in the midst of a diaper change.

Unfortunately, DeGeneres wasn't too reassuring in that regard, because as she's known to do, she took a guess at the baby's sex and it's her prediction that Knightley is totally having a boy. However, her track record on that particular subject is awful — more times than not, DeGeneres has guessed any given baby's sex incorrectly, so Knightley should be relieved. After all, if the talk show host thinks Knightley's having a boy, it's all but 100 percent certain she's having a girl.

Don't believe me? There's proof. There's so much proof.

When Bell was still pregnant with her first baby, she revealed to DeGeneres that she and her husband Dax Shepard knew the sex of their baby but didn't want to tell anyone what it was just yet. As always, DeGeneres guessed that Bell was having a boy, and as always, DeGeneres was wrong. Bell ended up giving birth to her first of two daughters, Lincoln, a few months later.

We know that Kunis and Ashton Kutcher are parents to a baby girl, but back before Wyatt Isabelle Kutcher made her entrance into the world, DeGeneres guessed that Kunis was pregnant with a boy based off of her weird cravings.

After doing a series of "tests" to find out if Portman was having a boy or a girl — including the thing where you let a necklace dangle over the pregnant lady's belly like a pendulum and see how it decides to swing — DeGeneres predicted Portman was having a girl. You're probably not going to be surprised at all that once again, she was wrong. Portman now has an almost four-year-old son.

Although DeGeneres guessed the first time Alba was pregnant that she would have a girl and she was right, her second time was not a charm. DeGeneres predicted Alba would have a boy her next time around, and instead, her first daughter, Honor, got a sister.

Before Hilary Duff revealed the gender of her baby on the show, DeGeneres used her typical method to jokingly guess that Duff was having triplets. Um, no — she still has only one baby. However, let's give this one to DeGeneres, because when she made a real guess, she guessed boy, and she was right! For once.