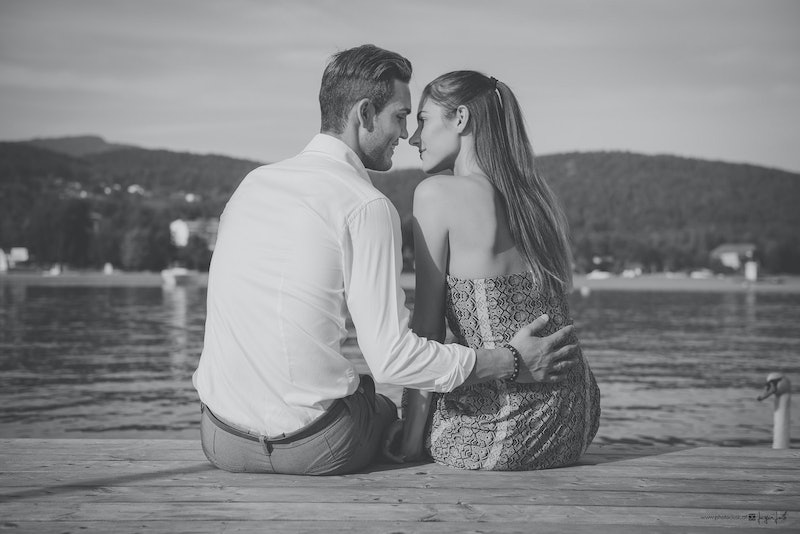 Ergh, money. Money is problematic enough when you're single and alone and trying to make rent and eat dinner and have the most fabulous dress at the party or the newest gadget to play with on the subway, but throw another person into the equation and things start to get dicey. Money, despite what any of us wants to believe about "love conquering all", really matters when you're in a relationship. I'm not just talking about letting someone pay for dinner on a date; We all know that even though we're empowered feminists, it's nice to be treated to a nice night out by someone else from time-to-time, and also, you're kidding yourself if you think that's the extent of how money will factor into your relationship. Love might, indeed, conquer all, but love still needs a roof over its head, and probably also doesn't want to have awkward conversations about financing a romantic getaway.

Money matters because of the expectations that come with it, and because of the way it dictates not only what you can do with your life, but what your limitations are as a couple. And if you ever decide to join financial forces, sometimes individual wants are subsumed by what's best for both of you. So naturally, having an open dialogue about money is crucial to not letting financial issues blow up in your lovestruck faces. When you're in a serious relationship with someone, it's not unusual for most of your money to become "group money". No, this doesn't always happen; Some couples go through their relationships and even marriages with near complete financial independence, which is great if that's what you want. But for so many couples, money becomes a more vaguely joint effort as the relationship moves forward.

And there are consequences to this: If you live together, you need to pay rent, bills, buy a new couch, silverware, etc. Your financial priorities become the relationship's financial priorities. While it's definitely still okay to spend money on yourself, really big purchases have to be run through the team. Sure, you can buy yourself that $80 dress on sale, but if you want the $800 dress, unless you're vastly wealthy, there might need to be a discussion about it first (considering for most that's, like, a whole month's rent). Before you start saying things like "But it's my money! I earned it!" (which is true, but also) here are six reasons why money actually matters in a relationship:

1. Relationships should be equal—and you need to decide what that means for you

Relationships should always be equal, and that means different things to different people. Some people think "equal" means a total 50/50 split in finances, but often that's not always possible or realistic for a couple. What if both parties don't make the same amount of money? Why should they feel forced to split things evenly, if it doesn't make sense for them, and they're comfortable coming up with another arrangement? Money can become important when one party can't keep up with the other financially but is still expected to. Knowing exactly what both partners are expected to contribute to a relationship is important to clarify, so no one ends up feeling exploited or out of their depth.

2. You don't want to unexpectedly need to support someone

Knowing how much money your partner makes/has is important. It just is. I'm not saying you have to start asking for bank statements on a second date, but if you've been together for a while, and plan to stay together, or if you're planning to move in together, you don't want to have "Surprise! I'm broke!" suddenly come up. It's more than fine to support your partner in trying times, and have them do the same for you, but you don't want to wake up one day to someone simply expecting you to carry them. You want to know that while your partner might not always be in a comfortable financial situation, their ultimate goal is to be able to put money in the bank, not to ride on your coattails like some lazy freeloader.

3. You might also have to be prepared to unexpectedly support someone

And yes, as mentioned above, there might be times when you need to unexpectedly support the other person in your relationship. Things happen—people lose jobs, big bills need to be suddenly paid—and in these moments, you'll learn that your relationship is a financial partnership as much as a romantic and emotional one. You need to understand that when it comes to money, if you're in a serious relationship, you're in it together. Their hard times are your hard times now, and vise versa.

4. You need to have similar financial priorities

Focusing on sussing out whether or not a potential partner is someone who you can trust with money is way easier than trying to have a relationship where one person is constantly monitoring the other's spending. You need to make sure that you are both capable of being reasonable, respectful and communicative when it comes to everyday spending, and that you share the same goals when it comes to spending and saving in general.

For example, when one person wants to save for a new dining room table and the other person is impulsively dropping $500 on a night out with pals on a regular or semi-regular basis, there's a pretty fundamental mismatch in priorities, which isn't healthy and isn't sustainable. When you're partnering with someone, especially when you're living together, your spending habits matter, and will always affect the other person. While you can't demand someone run every penny by you, you should trust that your partner isn't going to blow money the two of you need on something frivolous. You can't police your partner, so you need to be able to trust their judgement with finances, and that's much easier when the two of you share similar goals.

5. Planning a financial future together is important if you want to get live together/ get married/ have kids

A stable relationship often involves planning a future, whatever that looks like: renting together, buying a house, owning cars, having kids, taking lots of vacations. Whatever your path looks like, money is important because where you spend it is going to dictate how you live, and how you achieve your goals together.

6. It's too easy to fight about money

If you don't pay proper attention to the way money functions within your relationship, it can be destructive. If you don't communicate and have an open dialogue about your finances, you can very quickly find yourselves fighting about how the other spends money. You use money every day. Money affects everything from where you live to what you have for breakfast. Of course it's going to affect the way two people who are sharing their lives, to whatever degree, live with one another. It's important to pay attention to it, and to make sure that you're clear enough in your financial discussions that it doesn't sneak up and cause unnecessary friction.

More like this
The Best Time To Date After A Breakup, According To Experts
By Bustle Editors
What Is Megan Thee Stallion’s Net Worth? The Traumazine Hitmaker Isn’t Worried About A Budget
By Hugh McIntyre
Gemma Collins' Net Worth Is Only Going Up
By Catharina Cheung
What Is Brad Pitt’s Net Worth? The Bullet Train Star Now Makes 8 Figures Per Film
By Hugh McIntyre
Get Even More From Bustle — Sign Up For The Newsletter