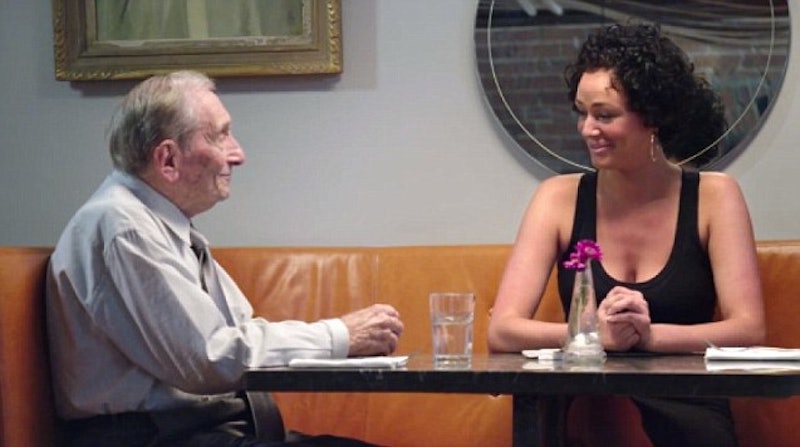 The title of this video is “Grandfather Goes on Tinder Dates” which sounds hilarious, right? Actually, I think a more accurate label would be “Grandson Uses Grandpa to Make Women Really Uncomfortable.” But maybe that title might lead prospective viewers to assume that the video is more awkward than funny and not watch it, which is exactly what makes it such an appropriate title—the video is more awkward than funny, with a decent helping of “creepy” on the side. The premise of the video is that Ethan Cole, who, along with Josh Shultz, makes up the entertainment company Slow Clap, persuades his 89-year-old grandfather, Joe, to set up a Tinder account under the pretense that he is a 21-year-old filmmaker. The plan is simple: Joe will go on dates, and Ethan will swoop in to save Joe’s Tinder matches from the senile old man, thus assuring their gratefulness and phone numbers. So easy, and not at all predatory and manipulative! What actually happens is that Joe goes on the dates, it’s really awkward, Ethan shows up, it’s even more awkward, and everyone gets to be uncomfortable. Also, I'm pretty sure they literally follow a woman down the street after she tries to leave at one point. Cool job, bros.

Look, I’m not saying that this video is evil or the most misogynist thing ever; it’s just sort of douchey, and, what’s worse, it’s simply not very funny (unless you think women being uncomfortable is funny in itself, which apparently some people do). Here’s where this video runs into trouble:

Yes, everybody edits themselves on dating sites. Of course you use the most flattering pictures of yourself, and you make yourself seem as funny and interesting as possible. But it’s not OK to simply make up a brand new persona and fool people into believing it’s real because it wastes everyone’s time. So, yeah, also...

In the online dating world, it takes a lot of time to separate dates with real potential from randos with whom you have nothing in common. When people lie on their profiles, they’re being disrespectful of their matches’ time and energy. The women in this video too time out of their schedules to meet a "21-year-old filmmaker" and instead got to be the butts of a practical joke.

3. Someone being old doesn’t exempt him from being creepy

In the video, Joe appears to be a sweet old guy, and he probably is. But think of this situation from the women’s perspective: They show up for a date to discover that the person they’ve been chatting with has been lying the whole time and is in fact an octogenarian pretending to be 25 in order to pick up younger women. That’s not charming—it’s creepy.

4. The women are plainly, painfully uncomfortable

5. Women being uncomfortable is not a punchline

It’s just not. There has to be more to a joke than “Ha! Made you cringe!” for it to be funny.