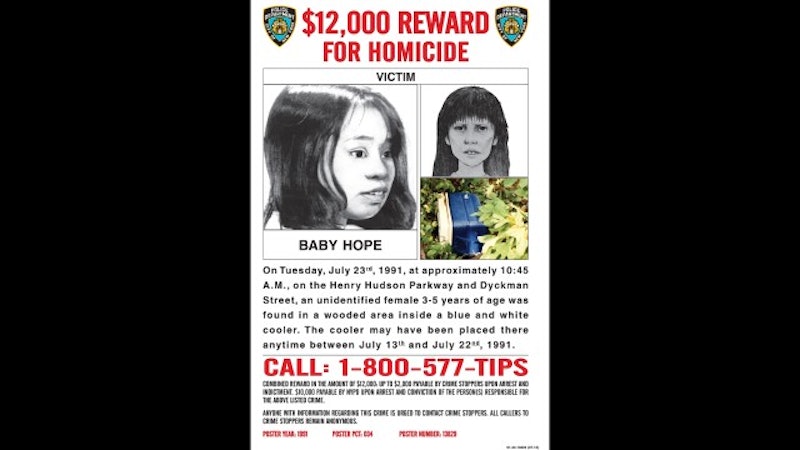 Decades after the case went cold, New York Police Department (NYPD) officers identified the mother of "Baby Hope" using DNA testing on Tuesday. The file for Baby Hope landed on the desk of Detective Jerry Giorgio on July 23, 1991: A road worker had followed a rotting smell to a cooler in the woods along Henry Hudson Parkway. Encased in a bag inside the cooler was what was left of a 3-to 5-year-old girl.

She appeared to have been suffocated about a week before, and her naked, malnourished body, doubled over in the cooler, showed signs of sexual abuse.

As the search dragged on for the culprit, officers began calling the unidentified child "Baby Hope" — hoping they would eventually solve the case. Giorgio never found the person behind the crime, but kept an eye on the case long after it was closed.

"It was so frustrating," he said recently. "We initially thought we'll get her identified and go from there and probably solve the case. It didn't happen."

In 2011, NYPD exhumed Baby Hope's body from the Bronx cemetery she'd been buried in. They obtained a DNA sample, but tests against DNA databases of felons or active missing persons didn't lead to anything.

But this summer, NYPD returned to the town near where the body was found to enlist the community in one last push for tips. Police sketches of the child and a $12,000 reward led police to a woman who claimed she knew Baby Hope's sister. Subsequent testing led to a match with the mother.

Police say the woman is cooperating with authorities and will not release her name as the case is still classified as a murder.