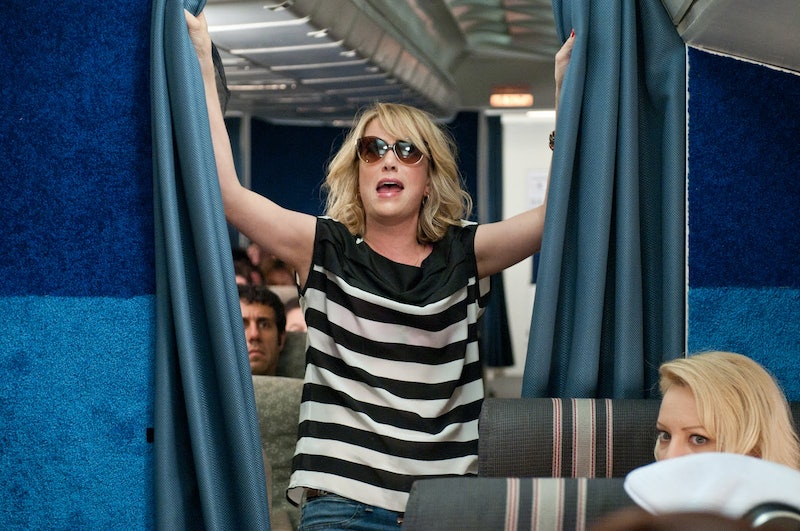 For people who hate everything about airplanes, getting over your fear of flying may sound daunting. Just the thought of soaring thousands of feet above the clouds is enough to make nerves stand on end for people who are prone to anxiety and subsequent panic attacks. But, it's necessary if you know your flight anxiety is holding you back from things that are important to you.

I'm right there with you. I have always had a fear of heights. It's held me back from being the queen of the jungle gym in elementary school, from standing too close to balcony edges while everyone else enjoyed stunning views, and from being the favorite flapper at my sorority's Roaring 20s mixer because the table people were standing and dancing on was rickety. Flying can sometimes seem like a nightmare, but you know what? I'm not going to let my fear of heights-turned-fear-of-flying keep me down (literally). And, I hope you won't either, knowing that you are definitely in the company of many. Our phobia, aerophobia, is more common than you may think.

As reported in a number of studies, 40 percent of people experience flight anxiety at some level. But as PsychCentral.com also points out, the chance of being in a fatal plane crash is 1 in 7 million. It's safe to say (no pun intended) that flying is the safest way to travel. As the research mentions, the most dangerous part is the drive to the airport, and people are more likely to die from a "lightning strike, shark attack or fall(ing) off a ladder."

Seriously — the reason you see plane crashes mentioned so often on the news is because it's such a rare occurrence. That's what makes news, well, news. Networks couldn't possibly cover all of the fatal car crashes happening daily, right? (Repeating this to myself always makes me feel better.)

There's no reason to stay grounded forever. To help put your mind at ease, I've compiled seven tips to make your next flight feel much more relaxing.

1. Find a professional who can help you

Of course, seeing a mental health professional specializing in aerophobia exposure therapy is at the top of this list, but if you've been there, done that, and want to try something less expensive and still effective, try an online course. One flight anxiety course that's gotten rave reviews comes from an airline captain who has helped many overcome their fear of flying. Surprise, it's called FearOfFlyingHelp.com.

These courses work because they bring many sufferers together, which helps students realize they aren't alone. With this, you find out the various ways people mask their fears while flying. (It's comforting to know you're not the only one freaking out on the inside, right?) The classes also help to teach the basics of aviation so that attendees realize their fears aren't usually based on reality. For example, some people fear that the plane on takeoff will keep going up and flip backwards instead of leveling off, which is aeronautically impossible. Another important point these classes work to reveal is your particular fear within the umbrella term of "fear of flying." Usually, this fear has nothing to do with the plane itself, and is usually more about claustrophobia or a fear of losing control. (I really think mine is the latter.)

Did you know that turbulence isn't as noticeable in the front of the plane? If you're an anxious flyer, going for the first class or business class seats might be worth it. Before traveling, try to pre-book your seats online, or tell the flight attendant about your preference before you board. If the pricier seats aren't an option, the closest to the front as possible is where you'll want to be.

3. Bring along your pooch

Having an emotional support animal on a flight helps countless distressed flyers. You may see more and more passengers, including myself, with pets on their laps, and that's because the practice is becoming more accepted. With the recommendation of your doctor, who will also need to help you complete paperwork specified per airline, a lap dog to cuddle with when you're feeling uncomfortable at take off could work wonders. As an emotional support animal, the pet is legally allowed to fly without a carrier and at no additional charge.

4. Don’t keep your fear of flying a secret

Let your flight attendants know, as well as your neighbors. The more support you get, the less likely you are to worry that you're creating a spectacle, adding to your stress. Flight attendants will check on you throughout the flight, and will usually have tips and tricks to make you feel more comfortable, too.

I like to turn my full attention to whatever show or movie is on the head-rest screen so that I can pretend I'm in my living room. Read a book, work on a crossword puzzle, listen to music, or watch a movie. What works really well is to save a movie or a season binge-watch you've been dying to see specifically for the flight. That way, you're focused and excited about the flight, as it's your one chance to switch off communication down below and indulge in your favorite storylines.

This might seem obvious, but yes, people who know what a panic attack feels like know that reminding yourself to breathe from your diaphragm is essential. It's what counters the fight-or-flight reaction our body has to anxiety. But, don't do it alone. There are a number of apps you can use to guide your breathing or even your meditation. The one that works the best is the one that works best for you. So, try out a few different ones prior to your trip.

And, don't forget! The paper bag, also known as the sick bag located in the back pocket of the seat in front of you, can be used as an anti-hyperventilating device.

Skip the coffee and cream, and opt for the juice or water with ice. When you're hyped on caffeine, your alertness heightens and so will your heart rate. That's the last thing you want when your heart is already beating out of your chest out of fear. You will also pick up on noises and sights you otherwise wouldn't notice if you weren't hopped up on coffee. So, do yourself a favor, and choose a beverage that will help to calm you down.

Whatever you do, don't avoid flights altogether. Cutting this travel option out will only make your phobia grow. The best way to battle it is to expose yourself to it as much as possible. Face your fear of flying and eventually, though you may still get a little nervous, you will feel confident in your ability to calm yourself down and (gasp) enjoy your flight.