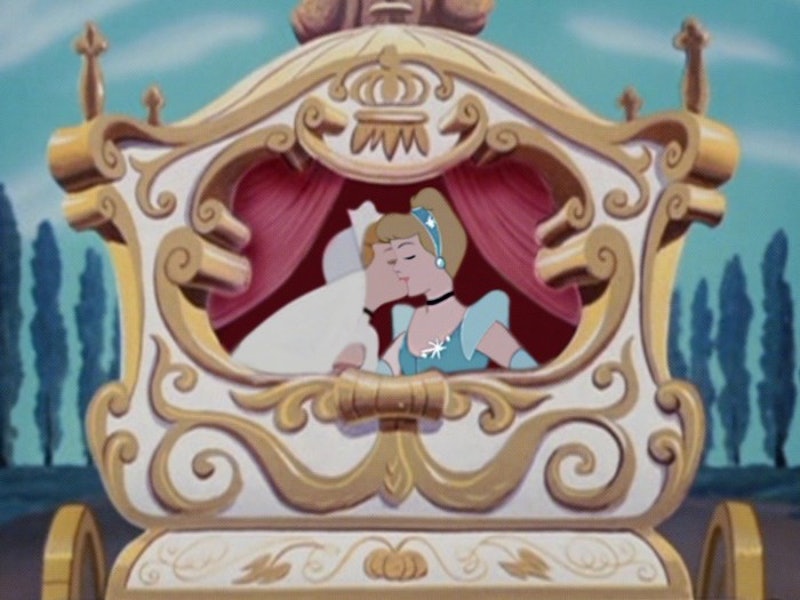 All too often, fairy tales and princess stories end with a handsome, male hero sweeping the helpless, beautiful lady off of her feet, usually after saving her for impending danger and doom. That tired script has been gradually changing, though, with animated heroines like Merida and Anna taking change with or without a man to accompany them — and one artist has taken the idea a step further: Saint Hoax’s “Save Yourself” series depicts Disney princesses as the heroines and heroes of their own stories.

In classic Saint Hoax fashion, the Disney princesses are used to portray an important message. The Middle Eastern artist removed the princes from the story, and instead added a second princess, kissing herself, to represent that she could be her own hero — no need to wait around for one to show up. On the artist’s website, he includes a quote that reads simply:

“I have waited too long to be saved

But why wait to be saved,

When I can simply save myself.”

Saint Hoax told the Huffington Post that this series is mean to celebrate the “the independent, self-sufficient kind of love…The kind of love that you don't wait to receive from someone else.” He also strategically released the images around Valentine’s Day, in order to promote self-love for all of the singletons out there. The images remind us that sometimes, the only person we really need is ourselves.

The message is a great one to support, especially since the target audience for these images is likely young girls, who adore Disney princess are still learning about what it means to be a girl. However, while the princesses kissing themselves is probably meant to evoke the idea that a happy ending (which are usually marked by kisses in Disney movies) doesn’t need a male hero, the kisses might also be seen as sexualizing the princesses, rather than empowering them. But would the message have been as strong if the images depicted Jasmine and Jasmine holding each other on the magic carpet, or Sleeping Beauty and Sleeping Beauty riding off into the sunset?

Saint Hoax has also used modified illustrations of Disney princesses to combat incest, eating disorders, and domestic abuse. We love this girl power message, and we’re excited to see what he will come up with next. See the full "Save Yourself" series at Saint Hoax's website, and check out more of his work on Instagram (@SaintHoax)