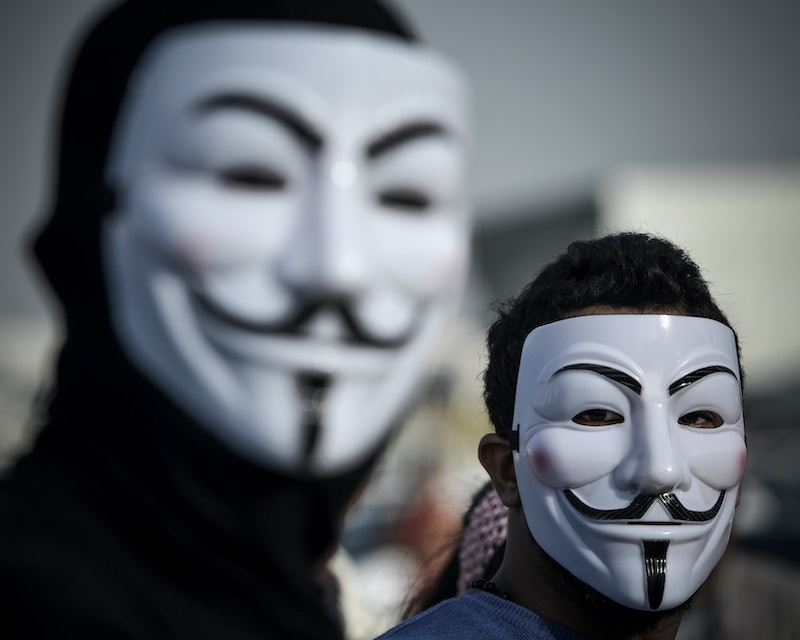 Here's one of the boons (and occasional perils) of our internet age — it's never been so easy for activists to spread their messages far and wide, all the more so when you sprinkle in some tech-savvy, hacking acumen. Yes, I'm talking about Anonymous, they of those ubiquitous white masks. Have you ever wondered what those Anonymous masks actually mean?

It's worth brushing up on now, considering the group's far-flung influence and longevity. The attendant culture that gave rise to Anonymous had been brewing for years before it finally blossomed into something that was visible on the public stage, even to less tech-entrenched observers. But since their campaign against the hyper-repressive Church of Scientology back in 2008 (a cause they've stayed interested in for the long term), they've been a pretty prominent emblem of modern, mass protest, also getting involved in Occupy Wall Street, as well as the Michael Brown and Tamir Rice shootings. And all along, you see more and more of those masks — grinning pale faces with thin black mustaches, and narrow, lifted eyebrows.

Well, fortunately, this a question with a pretty clear answer, and it's both historically and culturally interesting. The mask you see worn at Anonymous protests is called a Guy Fawkes mask, so named for a seventeenth-century Briton who infamously attempted to bomb the House of Lords. He was planning to assassinate King James I so that his Catholic daughter could ascend to the throne.

The scheme came to be known as the "Gunpowder plot," and it didn't work — Fawkes was captured, tortured in horrifying ways, and eventually put to death for his involvement. And for centuries after Britons would use these masks, with that distinct caricature of his face, to make effigies to destroy on the plot's anniversary: Nov. 5, 1605.

It's quite possible this story sounds familiar to you, even if you're not the sort to follow history too carefully, and there's a very good reason for that. Guy Fawkes was also turned into a rather immortal pop-cultural icon by the 1980s Alan Moore/David Lloyd graphic novel V For Vendetta , and even more so with the release of the film adaptation in 2005. Portrayed as a blade-wielding, tyranny-shattering vigilante with a Guy Fawkes' facade permanently fixed to his face, the protagonist "V" helped vault the mask back into the public spotlight. Just a couple years later, and they were popping up all over the place, the face of a new generation of high-tech protests.

As for what it really means to the individual wearer, that's harder to know. Fawkes' personal motivations and actions needn't weigh into it quite as much as the resulting history and iconography. In any event, whether it's used in the barest utilitarian sense (to keep identity hidden), or as a paean to Lloyd and Moore's well-loved work, or as a standalone icon of resistance to authority, it could feasibly now go down in history as the "Anonymous mask."

More like this
Lauren London’s Best Outfits From Netflix’s You People
By Alyssa Lapid
'Knock At The Cabin' May Start Streaming Sooner Than You’d Think
By Jake Viswanath
Reese Witherspoon Confirms This Fan Favorite Will Return For 'Legally Blonde 3'
By Jake Viswanath
Bennifer's Relationship Timeline Now Includes A Grammy Date Night
By Jake Viswanath
Get Even More From Bustle — Sign Up For The Newsletter
From hair trends to relationship advice, our daily newsletter has everything you need to sound like a person who’s on TikTok, even if you aren’t.