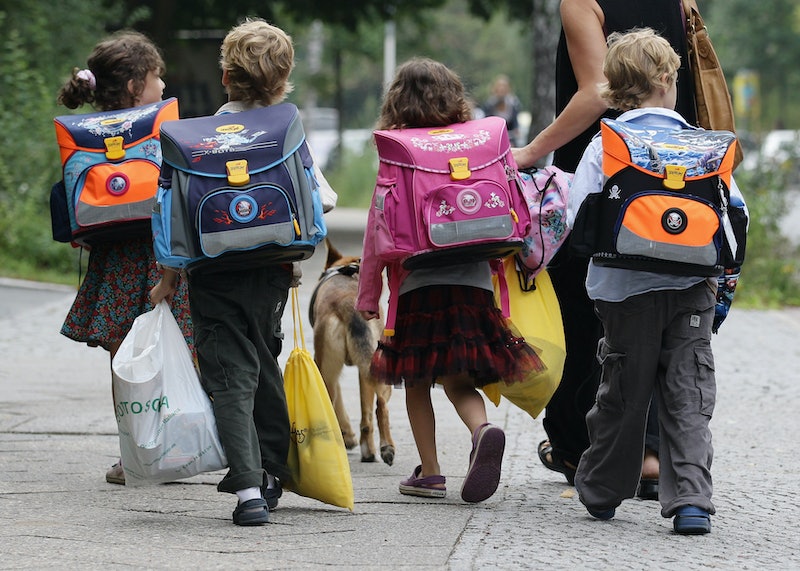 Schools have long been in the business of assigning grades to their students, but now, new legislation in Texas might be turning the tables. Gov. Greg Abbott, who recently replaced Rick Perry as the most powerful elected official in the Lone Star State, has thrown his support behind a plan that would attach a letter grade to Texas public schools, based on their academic performance. While the state has previously abided by a less specific classification system set forth by the Texas Education Agency accountability ratings system, Abbott's plan would be the first to use an A through F method, mirroring grades students receive in the classroom.

As the law currently stands, these letter grades are only assigned to districts as a whole, but Abbott's proposal would require each individual school to post their ratings on their websites in the interest of full disclosure and complete transparency. This, Abbott argues, would "ensure that parents, students and teachers have better access to valuable information about their school’s performance." Such a plan has long been a component of his education policy — in April of 2014, he announced a series of proposed reforms to improve the state of education in Texas, which suffered numerous budget cuts under the Perry administration.

Along with the letter grade, the new legislation would also require schools to provide detailed information about their day-to-day workings and student performances, including the school's spending per pupil and the proportion of the student body achieving the standards for their grade level in reading and math. Abbott's propositions seem to place a greater emphasis on statewide standardized testing, calling to mind No Child Left Behind-esque weights on these sorts of assessments.

But according to Abbott and his advisors, such a system has been implemented in other states with notable benefits, and has already proven effective at the district-wide level in Texas. As per the governor's "Educating Texans Plan," at least three other states in the U.S. already use these metrics to promote transparency and encourage improvements at various public institutions. Florida began using letter grades in 1999, which the governor's office claims, makes "it easy for parents and administrators to chart a school’s progress or regression."

And in Indiana, where As and Fs were first assigned in 2011, the system has "heightened community awareness and increased dialogue and action among education stakeholders." Last year, it seemed as though the ratings paid off, as the number of A-schools soared 8 points to 53 percent, a majority for the first time in the state. Robert Enlow, CEO of the Friedman Foundation, told Chalkbeat Indiana that the reasons behind this improvement were straightforward and predictable. He said:

My theory as to why the grades are up is very simple: teachers, superintendents and principals are responding to the environment of transparency, accountability and choice.

Tosha Salyers, spokeswoman for the Institute for Quality Education, echoed these sentiments, telling the publication, "The intent of school accountability policy is to set strong metrics for performance at the state level and then get out of the way. With the proper policies in place, local administrators and teachers will rise to high expectations." The A through F rankings, Gov. Abbott also argues, is the most easily understandable system of measurement, and would further allow educators and officials to address the specific needs of struggling schools. His plan notes,

Importantly, by identifying schools by letter grade, school districts and campus leaders can more appropriately determine how to assist individual campuses. For schools that are most in need of help, parents, along with local, state and community leaders can immediately work together to provide the schools with assistance, support, and direction so that students at the school can be just as successful as students at other schools.

But despite these success stories, a number of Texans (as well as Floridians and Indianans), remain skeptical about grades for schools. Many critics have raised concerns that effectively failing a low-achieving school would further stigmatize the institution, perhaps further entrenching it in a destructive pattern. Rather than providing inspiration or motivation, some say, teachers and administrators who receive an "F" may become even more discouraged, and students would likely suffer the consequences. Indiana State Teachers Association President Teresa Meredith told Chalkbeat:

It’s not a good system. Letter grades are not a good way to judge schools, period. Nobody likes an F. No teacher gets excitement from giving an F. Nobody wants their building to be labeled an F. It’s the wrong message to students you are trying to build up.

Of course, in other situations in which letter grades are assessed — think restaurant cleanliness, student academic performance, etc. — it would seem as though lower grades do, to some extent, motivate some sort of change, but the extent to which such a plan would meet with success in Texas has yet to be determined. And indeed, the legislation still may not pass — despite the governor's endorsement of such a plan, it will still need the approval of the Texas legislature to become law. But if all goes Abbott's way, the Lone Star State might join Florida, Indiana, and New Mexico in issuing letter grades to schools, presenting students and parents with a new method of assessing their classrooms.