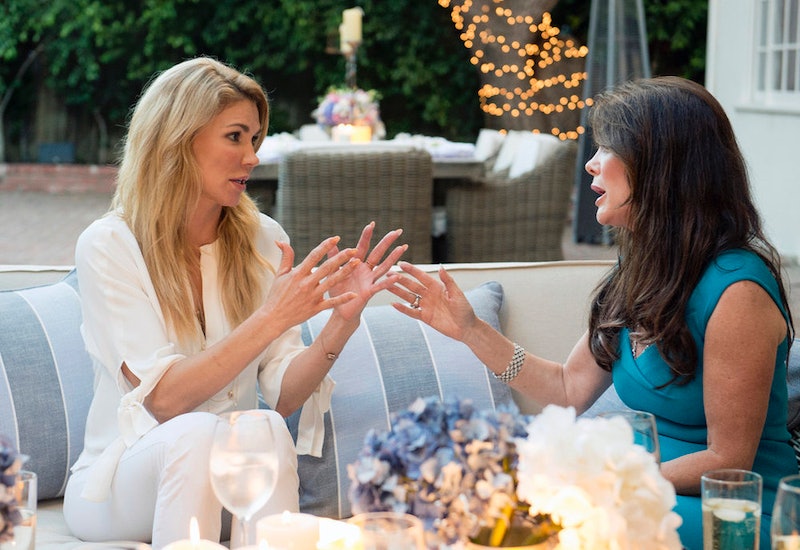 Tuesday night's episode of The Real Housewives of Beverly Hills was either the best or the most horrifying episode of Season 5 so far. I really can't decide. Well, after seeing Brandi Glanville kick off a Housewives singalong by crooning somewhat of an apology to Lisa Vanderpump at her birthday party, you get how you cannot understand how you feel about what you just witnessed.

So Brandi wasn't so much singing as she was just making some sort of noise with her mouth while saying some nice things about Lisa V. But hey, I'll take it! Kim Richards really didn't sound any better. However, Lisa Rinna's duet with Lisa V. wasn't half bad. Brandi even called the pair "the Menopause Mamas," which actually has a nice ring to it, right before she made a joke about how she's still young and gets her period. Well, at least she didn't ask Lisa V. if she'd like for her to perform oral sex on her again. Baby steps!

When Lisa V.'s husband Ken called Brandi up early in the episode to invite her to his wife's surprise shindig, I wasn't sure how the encounter was going to go down. Lisa V. and Ken famously had their issues with Brandi for much of Season 4. I think Ken was even more hurt than his wife was. This season, Lisa V. and Brandi have been able to sweep their drama under the yoga mat, but they haven't exactly been the best of friends as they had been during seasons past. Whenever they're in the same room with one another, "Let It Go" still pops into your head.

But you know, Ken's invite seemed to show a little progress. So what if he was inviting all of the other Housewives to the party, and there could have been some encouragement from the producers to ask his recent nemesis along? I chose to remain hopeful that the Vanderpumps and Brandi would be the terrific trio once again.

While it didn't exactly work out that way, there was hardly any conflict at Lisa V.'s party. No one raised their voices. No one got accidentally scratched by another woman's bracelet. Brandi barely even cursed. My, my, my, she really was on her best behavior.

However, that didn't stop Lisa V. from throwing a few digs Brandi's way. She asked Brandi how she got into the party upon greeting her and called her "a bitch" for leaving the table right before her toast. But don't worry. Brandi served it right back by stating that Lisa V. turned 73 years old and criticizing her friend Mohammed's devotion to her.

If you were fortunate enough to see Brandi and Lisa V. interact in their honeymoon phase, you know that throwing shade is kind of like how they express their love for each other. Maybe there's hope for these two yet.