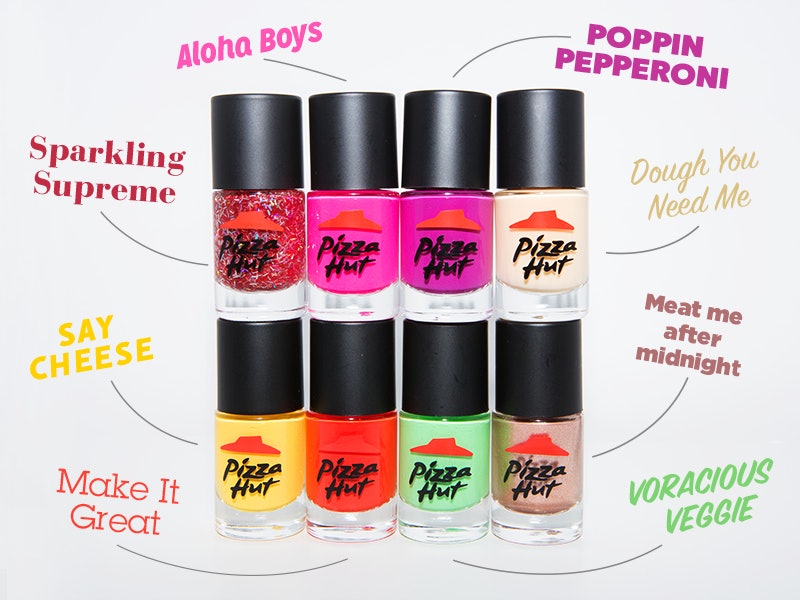 Attention all pizza enthusiasts, you might want to take a seat while I explain how a huge advancement in pizza history has just occurred. Are you sitting down yet? OK, here it goes: Pizza Hut Australia decided to release a limited nail polish line for Valentine's Day. Which means "Meat After Midnight" and "Dough You Need Me" are real nail polish colors (flavors?) that exist. Seriously, if this isn't enough to convince you to move to Australia, I don't know what will.

Unfortunately, and non-surprisingly, it's a limited-edition set, even though Pizza Hut should've known that every single nail polish-wearing, pizza-loving human would definitely want to buy it. Pizza Hut only created 30 sets, each of which were rewarded to those who won a pizza poem contest for Valentine's Day. Congratulations, you lucky ducks.

The set includes eight different colors in various shades, from pink and red to yellow and green. The best part about them all were their appetizing names: Sparkling Supreme, Say Cheese, Make It Great, Aloha Boys, Poppin Pepperoni, Dough You Need Me, Meat Me After Midnight and Voracious Veggie. Genius? Genius.

A few issues I'd like to address: Where was the announcement for submissions? And how did I not know about this contest? And why was this not extended to the American Pizza Hut lovers population?!

Honestly, just look at the bottles of joy. Anyone in their right mind would sign a petition to make them become a permanent thing. I may or may not be implying that we start a petition. All in favor of Pizza Hut nail polishes, say aye! Just look at how yummy our nails could look:

If all goes as planned, our pizza slumber parties will never be the same.