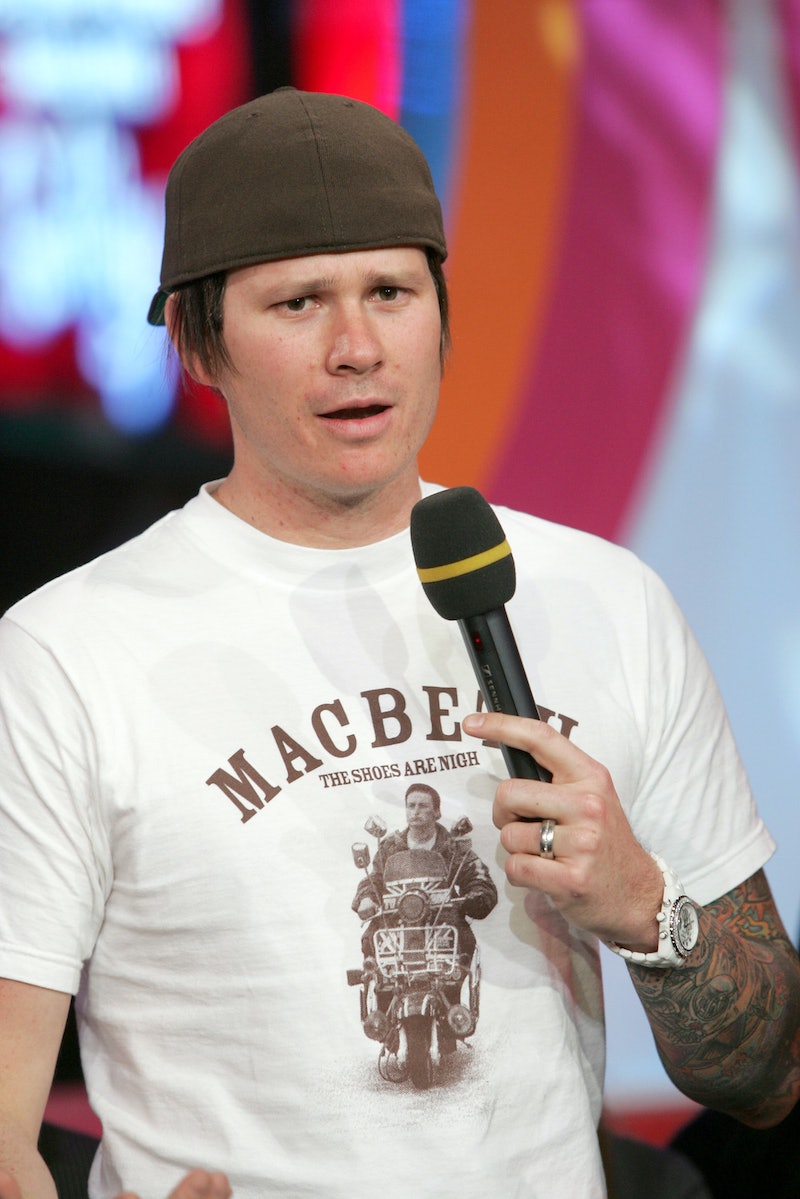 It looks like the former guitarist from Blink 182 may have a career as one of the pundits on Ancient Aliens. Tom DeLonge from Blink 182 talked about his belief in aliens in an extensive Q&A with Paper Magazine, alluding to phone-tapping, government cover-ups, and potential alien abduction. It seems like he's kind of fallen down the conspiracy theory rabbit hole and lost touch with reality just a little bit.

In the interview, DeLonge discusses his research and interest in extraterrestrial life at length. "I've been involved in this for a long time. I have sources from the government. I've had my phone tapped," he says. "I've done a lot of weird stuff in this industry — people wouldn't believe me if I told them."

In addition to attending numerous symposia and reading hundreds of books on the topic, he claims to have been included on NASA email chains about confidential Area 51 research. In some of the more bonkers parts of the interview, he talks about getting caught in the middle of a government UFO research cover-up involving the second assistant of a Nazi scientist who built spacecrafts. At times he babbles on in paranoia, mentioning that he talked about his beliefs to a 70-year-old engineer who told him, "You better be real f--king careful about what you're talking about."

He talks about the governments who have "watched this phenomenon" of UFOs and competed with each other to figure it out in a top-secret arms race that the public TOTALLY CAN'T KNOW ABOUT!!

It's a really complex game that's been played, especially since the '80s. The CIA was very interested in the UFO civilian research groups, with the intention of being in control over all the research and the public awareness. It was a psychological operation. They were very scared of Americans being gullible and having Russia come in and repeat a War of the Worlds scenario. So the CIA said, "We better get in there and make everyone go crazy, but at least it's controlled, and when we're in charge we can slowly let people know the phenomenon is real, but, 'Don't worry — we've been building something secret to help protect us.'" It's a crazy thing, but it's real.

Suppose that DeLonge is right, and that the government has been hiding alien research from us for decades. It would mean that we maybe have some new alien neighbors, which is all well and good. Beyond that hypothetical new information, there are PLENTY of dubious practices and projects that the American government has hidden from its civilians for years. At the moment, they're probably hiding plenty of scary things that are happening to humans that have nothing to do with extraterrestrial life.

But DeLonge seems to be less concerned about that aspect, and more concerned with making people believe him. Later on, he discusses his own close encounter while on a trip to Area 51 with his buddies:

I woke up right around three a.m. My whole body felt like it had static electricity, and I open my eyes and the fire is still going, and there's a conversation going on outside the tent. It sounded like there were about 20 people there, talking. And instantly my mind goes, OK, they're at our campsite, they're not here to hurt us, they're talking about s--t, but I can't make out what they're saying. But they're working on something... Then I close my eyes and wake up, and the fire is out and I have about three hours of lost time.

I'm not sure if he was abducted during those lost three hours, or if he just drifted off to sleep. What ever the case, his friends TOTALLY felt the E.T. presence too:

I get everyone up first thing in the morning and go, "Did anybody hear all the chatter last night? I couldn't move my body, I was stuck there. I couldn't hear anything." And one of the guys I was with goes, "Yes! They were all around our tent, they were talking. I told you!" And the other guy slept right through it. He had no idea what we were talking about. [laughs] It sounded like English, but you couldn't make out any words. You knew you weren't threatened, you couldn't move your body, but you were very aware of the conversation going on for a period of time.

I've never had an alien encounter myself, so I can't speak to the plausibility of his story. I know the universe is HUGE, and the idea that intelligent life doesn't exist beyond our planet is, frankly, a little self-absorbed. I also know that falling down the conspiracy theory rabbit hole can distract people from the very real problems happening on Earth at this very moment. This seems like what's happened to DeLonge. But paranoid ramblings aside, he seems like an intelligent guy. I'm sure he could put his brains to better use than IRL X-Files matters.