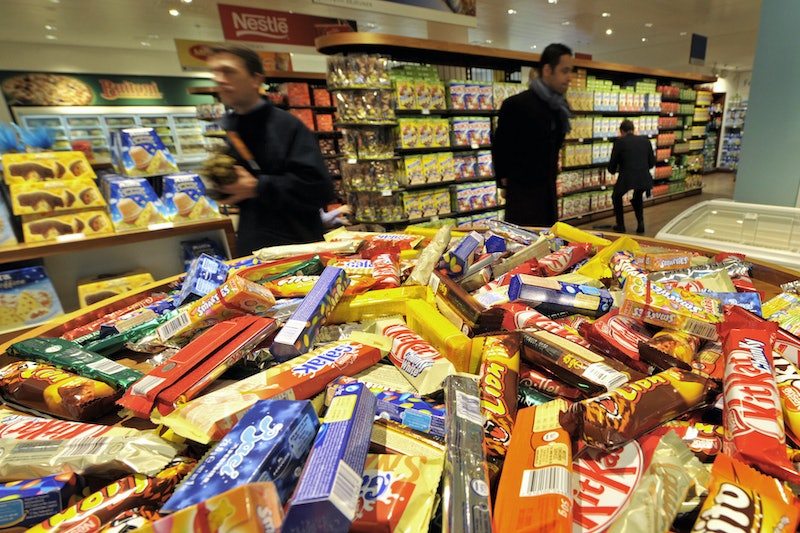 Jumping aboard the health train, Nestlé announced Tuesday that it will remove artificial flavors and colors from Nestlé's more than 250 candy products in the American market by the middle of next year. The shift away from artificial ingredients in the United States' product line comes two years after the candy giant moved all of its British chocolates and sweets off of artificial colors, in keeping with consumer research trends. Prompted by market research that indicates that 60 percent of Americans care about the presence of artificial additives in their food, the candy giant has retooled many of its candy recipes around naturally derived colors and will sell the new products in specially marked packaging.

Nestlé is the parent company for a number of popular candy brands, including Butterfinger, Baby Ruth, Crunch and Sno Caps. The switch from artificial additives and colors will force changes to more than 75 of its recipes.

For instance, rather than rely on Red #40 and Yellow #5 to dye the Butterfinger filling its characteristic show-stopping yellow, Nestlé will substitute a natural coloring derived from the annatto plant. The Crunch bar will also get a makeover: the artificial vanillin will cede to natural vanilla flavors.

Doreen Ida, the president of Confections and Snacks at Nestlé USA, explained the logic behind the company’s decision in a Tuesday statement:

We know that candy consumers are interested in broader food trends around fewer artificial ingredients. As we thought about what this means for our candy brands, our first step has been to remove artificial flavors and colors without affecting taste or increasing the price.

All future Nestlé candy and chocolate products will rely on natural flavors and colors as well.

Two years ago, Nestlé chose to naturalize its products in the United Kingdom after a market survey found that 74 percent of consumers in Britain considered the presence of artificial additives in making purchasing decisions. Redoing its candy repertoire, however, had been years in the making as the corporation tracked down natural substitutes to the bright, kid-friendly colors that form a key component to its candies’ appeal. (Taste the rainbow, anyone?)

Now in 2015, the push for natural ingredients has crossed the Atlantic. In its press statement, Nestlé touts its role as the first major U.S. candy producer to move away from artificial colors.

Artificial colors, which are generally synthetic, man-made chemical additives often derived from petroleum, enjoy a controversial status in public health circles. The FDA has banned several colors over the past few decades for, among other health problems, acting as carcinogens and causing cancer. Only seven artificial color additives remain legal under the FDA standards; in other countries, many of those additives are banned over health concerns following studies that linked some artificial color additives to hyperactivity in children.

Many European countries have outlawed the use of Red #40, for instance, which has been linked to tumors in the immune system. Likewise, studies have demonstrated that Yellow #5 can cause a cell’s DNA to mutate. The U.K. recommended that food manufacturers stop using both color additives, but the FDA still allows them in candy, ice cream and other food products.

Parents and health food advocates have criticized the addition of artificial colors to food products for years to little avail — at least in the United States. The FDA has shown little interest in opposing the industry giants that support the continued use of Red #40 and Yellow #5. But if Nestlé’s announcement is any indication, consumer preference might move the market towards more natural ingredients without any substantial interventions from regulatory agencies.

Yes, it's great that Nestlé's new chocolate line is better for the body, but we can't be guilt-free Crunch Bar consumers until we know its products are produced in fair and humane ways. Though the company has explicitly denounced the use of child labor, its has come under fire in the past for obtaining its cocoa from areas that employ children. That said, as part of its Cocoa Plan, the company has been working to support the children it found working on its cocoa farms and to place them in schools.