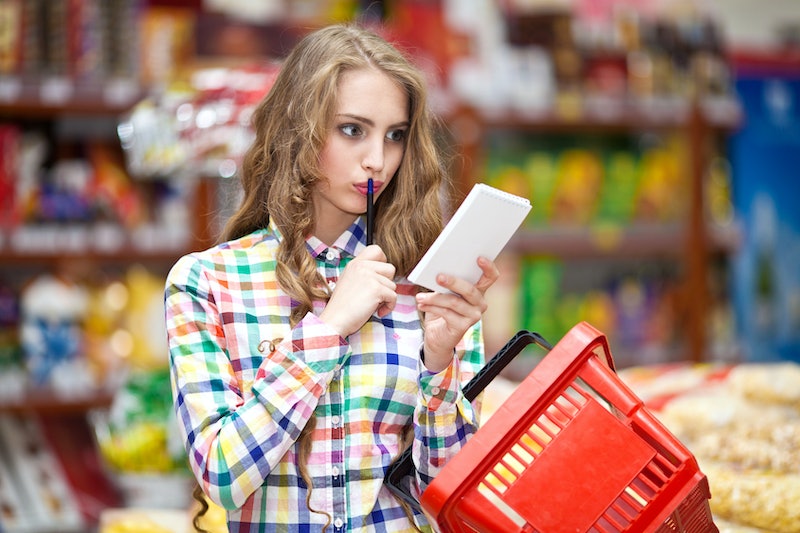 Grocery shopping, you are my Everest. Grocery shopping for one person? Impossible. Just this past January, I celebrated my one year anniversary living in New York City. I was semi-expecting an applause, but whatever. And that same month, I also celebrated my six month anniversary of living alone (with roommates, but I mean sans-family or friends). As a grown up. In the real world. And besides the luxury of doing whatever I want, i.e. being in bed by 10 p.m. with eye covers on and my teddy bear (shout out to you, Geoffrey), there are also a few downsides. Most of all, no more shared meals. Enter anxiety.

In my rookie days (read: up until last month), I was struggling to find the perfect grocery list. Food has a very short shelf-life if you're the only one eating it. I found myself tossing more food out than I was consuming, and buying each and every meal via Seamless became more and more enticing until it finally sunk in that I live in a box that costs more than one paycheck, and that I had other things to pay for, like you know, electricity. And I don't know, alcohol. I couldn't be wasting away those hard-earned dollars on takeout five nights a week.

After a series of trial and error, I've finally come up with a pretty solid list of what to buy when I'm food shopping, and I've figured out exactly where to go to buy different items. People tend to go to the grocery store that's closest to home, which makes sense, because carrying all those bags more than a couple of blocks is not ideal. But I've found that by going on separate, smaller shopping trips on different days and to different places, you can save your money and your dignity — because sweating and turning beet red after lugging around your groceries is not ideal.

So without further ado, here's my breakdown of everything you'll need if you're only shopping for one person — yourself.

At the grocery store:

At your trusty fruit and vegetable cart:

I love my fruit and veggie cart guy. I wish we were on a first name basis, but he probably already has too many fans for that. I usually give him a quick visit after work, since it's less cumbersome. And the best part is he's somehow always there. Rain or shine, 7 a.m. or 11 p.m. While there, I pick up:

Things you should always have:

And then there's a list of must-haves that should live in your fridge and pantry regularly. These tend to have a longer shelf life, and can be incorporated into so many dishes.

Again, these grocery suggestions won't work for everyone. Maybe you don't have time to make multiple trips. But I've found that being more specific about where I buy food has also forced me to be more specific about what I buy, and usually results in meals I actually want to eat. And smaller portions at the fruit stand means I throw out less food than, say, buying a whole bag of lettuce at a grocery store that I never end up finishing. Seriously, I swear it's like an endless supply.

Some of these tips may seem like no-brainers, and most of them are, but they become hard to follow when you've got a full-time job and some semblance of a social life. But if you're feeling lost in the realm of cooking and grocery shopping for one, give this list a try. And if you've got a Trader Joe's nearby, bless you.