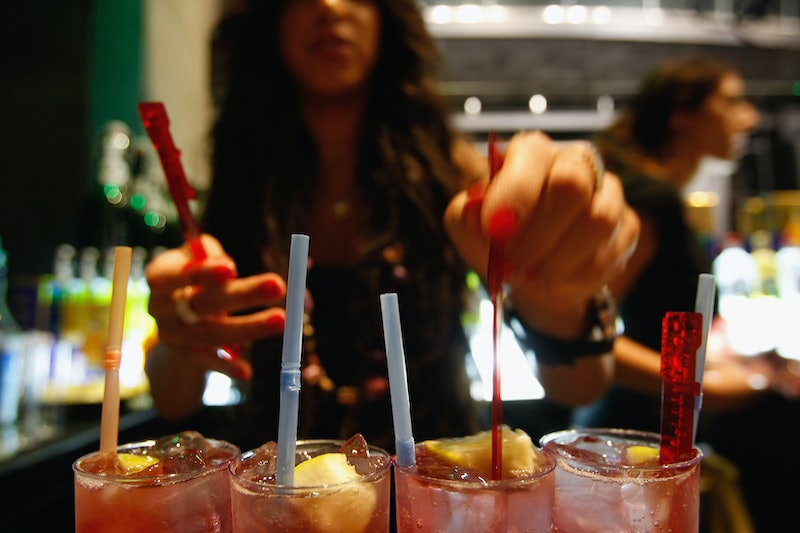 It’s Saturday night, and you're out at your local bar. You’ve shaved your legs and put on lipstick, which for a lot of us can only mean one thing -- tonight’s the night to meet someone new. First things first though. You need to pick your drink. Perhaps your addiction to Bravo's Southern Charm has made you partial to drinks sipped south of the Mason-Dixon. But choose carefully because the drink in your hand indicates a lot about your personality and taste. It also has the power to send signals to certain types of potential partners. So whether you're ordering a spiked iced tea or a shot of whiskey, choose wisely.

Old Money doesn’t necessarily flaunt their wealth, but you know they definitely have it. The people at Brooks Brothers recognize them when they walk in and know their measurements by heart. You'll meet Old Money at the racetrack, where you'll receive an invitation to join their private box. It's been in the family for ages.

Think popped pink polos, mint green shorts, and seer-suckered Sperry shoes. New Money is part classy, party trashy. New Money will always remember to bring flowers for the hostess of a dinner party, but is just as likely to tell one too many stories about their beer-bonging college days.

When you meet someone that went to a prestigious school, you'll know it in about 0.47 seconds. Because they'll tell you immediately, and then list all the famous people that went to their particular ivy, too.

The Mama's Boy loves three things: his god, his country and his mother. Fiercely loyal, this person is the type that will let loose on a Saturday night, but will always make sure to wake up on time for Sunday church (and dinner at mother’s afterwards, of course.)

The Hipster only likes BBQ a certain way (vinegar style), drives a truck for no specific reason (definitely not the type to haul things) and only drinks moonshine (bought from a liquor store.)

The College Football Fan would never root for any team other than their alma mater, and you’d never be fool enough to ask them to. This person is really nice from January to August, but once fall rolls around, you start making excuses to hang out with other people during game time. The good news is, there will always be extra buffalo chicken wings.

Bustle and Bravo's Southern Charm partner to celebrate Southern lust and libations. Be sure to tune-in to Southern Charm on Monday, March 16 @10/9c, only on BRAVO.