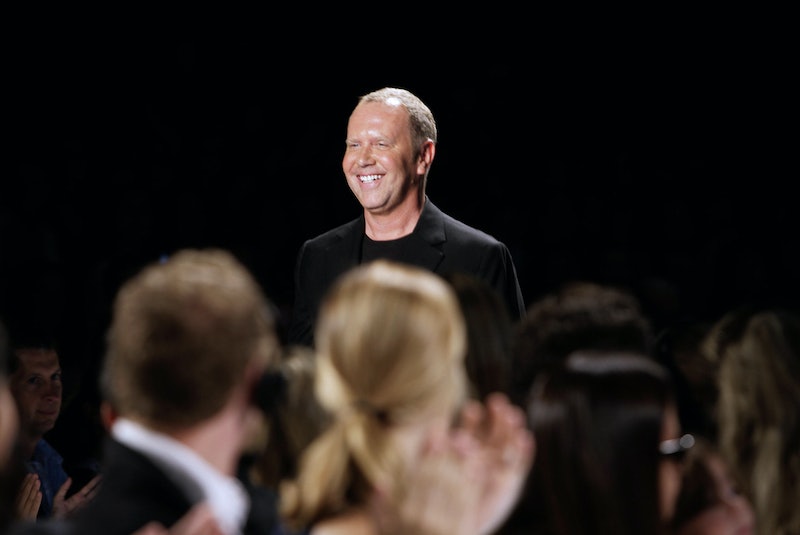 Though Fashion Week often revolves around the concept that "More Is More", occasionally designers buck the trend and simply aim for classic opulence. Such was the case on the Michael Kors Fall 2015 runway, where bold prints and even bolder furs punctuated a collection that subtly sparkled down the catwalk. Set against a base of cashmere camel-hued skirts, tweed capes and checkered cropped trousers, Kors scattered a handful of jewel toned fur stoles to complement the shades of yellow, emerald, aqua, and burgundy which ran throughout the collection.

Kors adores a good pattern and loves any chance to evoke the style of another era. This collection appeared to take inspiration from the femme fatale costumes of The Maltese Falcon as well as the gender-bending and ever-glamorous look of Studio 54. Though the collection began on a simple note of camel sweaters and cozy midi skirts with modest embellishment, Kors took a glittering turn by the end.

In addition to a transparent, pleated navy silk skirt which shimmered with beaded embroidery as it skated down the runway, a black suit embellished with countless silver beaded paillettes stole the catwalk, and an inky floor-length gown gave off the slightest wink of glitter as it passed by a captivated audience.

Model Karlie Kloss ended the show in a smoke grey keyhole gown littered with silver beadwork, followed shortly by a beaming Kors. You'd best grab your finest fur and sequins out of your closet, because normcore is out and unabashed luxury is back in — at least according to this design virtuoso.