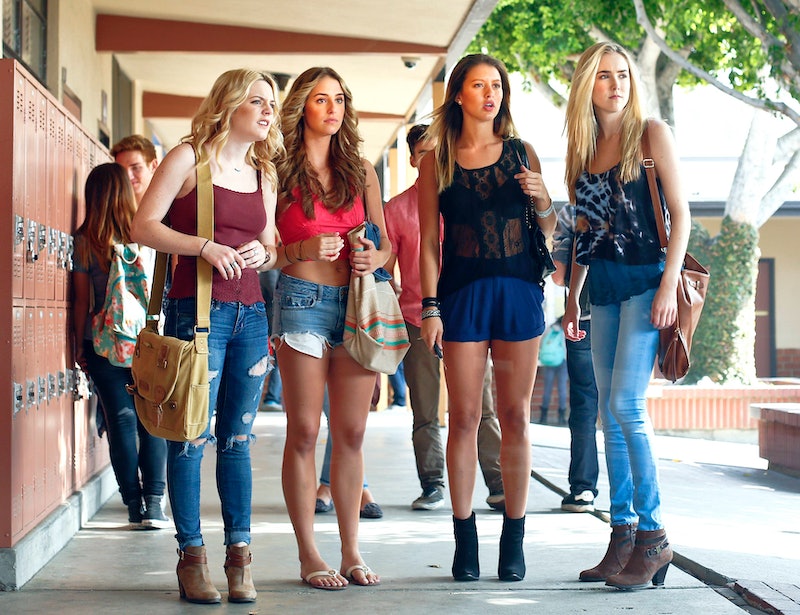 Lifetime never met a CNN headline it didn't like, and it found one ripe for TV movie adaptation in Babysitter's Black Book , based on the story reported by ABC News of real-life high schoolers who allegedly turned to running a prostitution ring in order to make some additional cash. In the Lifetime movie, it's to pay for college. Actually, it's not unlike another recent Lifetime original movie, Sugar Daddies , which covered how some real-life college students turned to having sex with older men also in order to make some additional cash to pay for college.

Lifetime's adaptation is largely changing the original story by making it sexier, as well as less exploitative and disturbing. I don't think the real babysitters all happened to look like Sports Illustrated Swimsuit Issue models, because, they were, you know, regular high school students. And one of the dads in the movie looks like he went to high school with the actresses playing the babysitters! I guess that is a soft similarity to the real story, because according to the local paper, Herald-Tribune, the alleged solicitor, John Michael Mosher, who was charged with "felony sexual battery on a victim older than 12," was in his early 20s when he reportedly arranged to receive sexual favors from a 15-year-old student in exchange for $40 and a bottle of alcohol.

Two high school students were also arrested and charged with human trafficking after allegedly arranging meetings between clients who were willing to pay to have sex with underage teens. According to The Daily Mail, one student arranged the meetings and the prices via Facebook, in hopes of making some extra money, and, in the words of police captain Tim Mattmuller: "the motivation was money, alcohol and drugs." Nothing reported said they were hoping to use the money for college, as is the case in Babysitter's Black Book, however this narrative change allows the characters to remain "sympathetic" despite doing something highly illegal. Also changed was the gender of the ringleader's accomplice — looks like Lifetime's posse is all-girls, while a male was involved in real life.

Lifetime also changed the setting from the small city of Venice, Fla. to what looks like a generic suburb. And while the real-life allegations show why we need consent and statutory rape laws, because 15 and 16-year-old kids should not be having sex with adults, the Lifetime trailer makes it look like a sightly more risqué version of Pretty Little Liars.

A film with the same premise, The Babysitters , came and went back in 2007 without much fanfare. Actually, onscreen babysitters get into a lot more trouble than I assume they do in real life. Pretty much the fastest way for a female character in a movie or TV show to get wrapped up in crazy shenanigans is to be a babysitter. Think of Don't Tell Mom the Babysitter's Dead , where assuming responsibility for her younger siblings leads Christina Applegate's character to drop out of school and get a full time job. In Adventures in Babysitting, sweet innocent Elisabeth Shue is forced to encounter a bunch of ethnic stereotypes and early '90s inner city paranoia.

Even The Babysitters Club got into way more trouble than they would have otherwise as 13-year-olds in Stonybrook, Conn. Babysitting: the pastime of choice of dangerous teenage girls — at least in the movies.