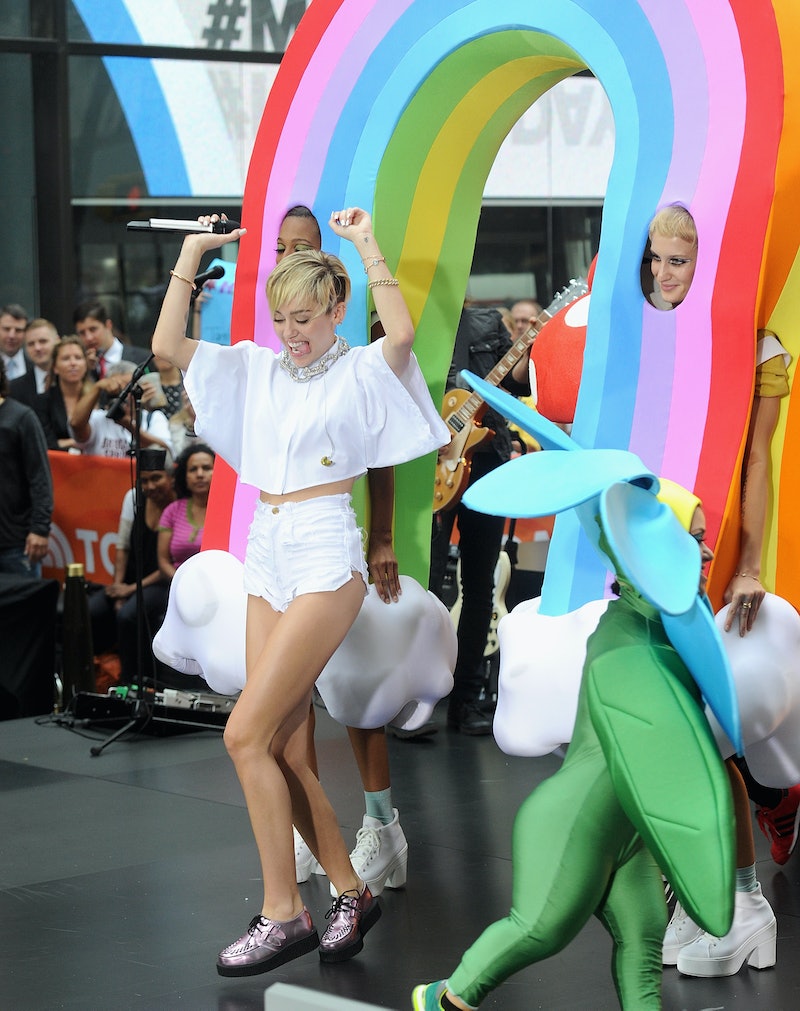 Before we all got to intimately know Miley Cyrus' tongue, before we saw her shock audiences at the VMAs, before we saw her appropriate black culture in a myriad of ways, I speculated that Miley was on the cusp of something: she could take the path of fellow Disney royalty Justin Timberlake and do her research on hip-hop, dig deep into her emotions, and come out with a pop album that would completely reinvent her into a serious pop contender. Or, she could regurgitate more pop songs about partying and cash in on her new, edgy looks out of an insecure need to prove to audiences just how harder and different she is from Hannah Montana. Now that Miley Cyrus's album Bangerz is out, I think we have our answer.

It’s clear that at the very least, Miley is running the show. As much as Sinead O’Connor wants to deny it, from the multiple interviews that Cyrus has done, it’s clear that she’s in charge of what she does, what she looks like and what her music sounds like. And Miley knows that she’s caused some controversy – for her, that was the whole point. She wants people to talk.

But most artists cause controversy because they believe they have something to say. Madonna did it to revolutionize female sexuality in pop music. Kanye West did it to speak his mind about racism and consumerism in modern society. Lady Gaga did it to champion gay rights. Some of these statements may have been misinformed or may have come out of a desire to make more money, but they had something to say nonetheless.

What does Cyrus have to say on Bangerz? Nothing that we haven’t heard before. We’ve got all the greatest hits we’ve already heard from the pop divas of today: passive female sexuality (“#GETITRIGHT”), testaments to what a badass you are (“SMS,” “4X4,” “Do My Thang”), partying (“We Can’t Stop,” “Love, Money, Party”), and falling hopelessly in love, getting cheated on, and getting hurt (pretty much everything else). It doesn’t feel like we're getting a new perspective on Miley Cyrus; rather, it feels like she’s just put a mirror up to the pop music of today and recorded it for the entire world to hear.

As for the actual music, it’s hard to critique something that feels like such a product, something that feels like it was engineered in a pop music lab. Most of the work on this album can be attributed to a person who is not Miley Cyrus, and most of those people are names you’ve already heard. Mike WiLL Made It has been one of the best things to happen to mainstream R&B in the past few years, and most of the tracks he produces for Cyrus sound like leftovers cut from a Rihanna album. And the Pharrell-produced “#GETITRIGHT” is a refreshing and sugary departure from the album’s heavy handed musical references to rap songs and EDM, but it’s far from Pharrell’s best work.

Cyrus’s voice right now is probably the best it’s ever sounded, but it’s hard to glean that from the album. Cyrus often sing-raps (a move that’s ill-advised, unless you’re Cassie), and when she’s not, she’s usually cloaked in auto-tune. For the most part, she sounds about as lifeless as the guest spot girl on a rap song. But in rare moments where she has a real emotion to express, like “FU,” you can hear what a powerhouse of a voice she has: rough, strong, and mature beyond her years.

So it’s disappointing to see her put so much work and stir up so much controversy for such an empty album. Bangerz is in no way offensive, and it doesn’t feel like fun. It feels like having to hear the popular girl who sits behind you in your high school math class talk about her weekend. Miley has been acting out so people will pay attention, but we’ve finally tuned in to find nothing out of the ordinary.

No insight into who she is, no interesting new concepts, musically or lyrically, no issue she’s championed, not even an impressive display of musical talent. As much as Miley tries to tell us that she’s a wild, badass rebel, there’s nothing that she’s said or done to tell us that she’s doing anything different than the pop divas before her. Miley’s antics demand for us to love her or hate her, but it’s hard to even care about something so redundant.

So, congratulations, Miley: you got us to buy into your commercialized teenage rebellion. You’ve successfully punked America into over-hyping, over-exposing, and over-intellectualizing your actions. But the next time you command 15 minutes of fame, it would serve you better to use it for something a little more interesting. This is the album that everyone expected from you. But making an album with more substance that takes real risks would create the kind of controversy that lasts for years.