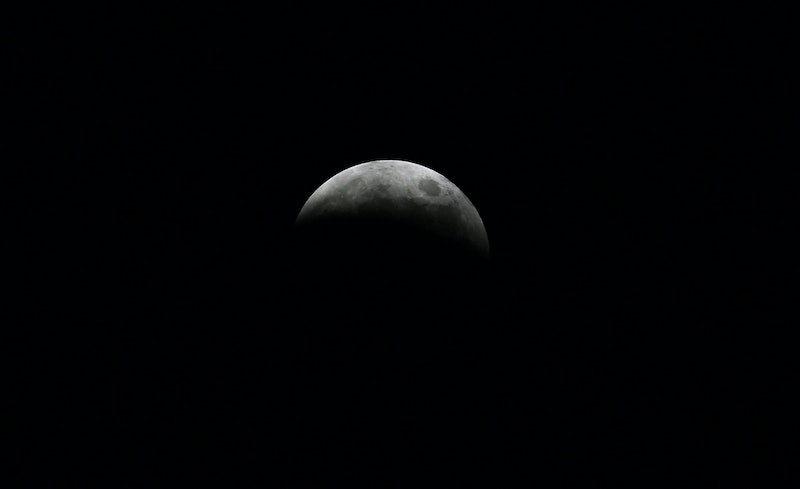 By now, we've all heard of supermoons — we had three in a row last summer. They're basically the hottest astronomical phenomenon right now, and another one is set to appear on Wednesday night, but with a twist. This supermoon will also be a black moon, a much lesser-known phenomenon that sounds like the name of a goth band. When you put the two together, you get an extra-large moon that's dark in color, which should make for an interesting sight — if you can find it. If you're curious to see what this lunar hybrid is all about, here's where you can watch the black supermoon on Wednesday night.

But first, a refresher course. As you may know, "supermoon" is just the colloquial term used to describe new moons or full moons that occur at its closest approach to Earth and therefore appear larger than normal. We just had one on Jan. 20, and in fact, that was also a black supermoon, and the supermoon projected to appear on March 20 will also be one. So what is a black moon, then?

What makes it black? The color refers to the darkness of the new moon, whose lit side is completely facing away from Earth, so we don't see it. During a new moon, the side that's facing us is the infamous dark side of the moon. Though the origins of the name are not clear, it has caught on with people who practice forms of Paganism, such as Wiccans, who believe that rituals performed under a black moon will be more effective — I wonder if that means they'll be even more powerful under a black supermoon?

Whether or not you plan on breaking out your spellbook, it's worth taking a look at the black supermoon. Here's how:

Find a spot with a good view of the western horizon, take out your binoculars, and look for the black supermoon as the sun sets. Stay until the sky completely darkens, and look for a thin silver crescent shape, which can appear on the outer edges of a black moon. And while you're gazing at the sky, try to look for Mars and Venus and other celestial objects because they'll be more visible without the moon's glow washing them out.