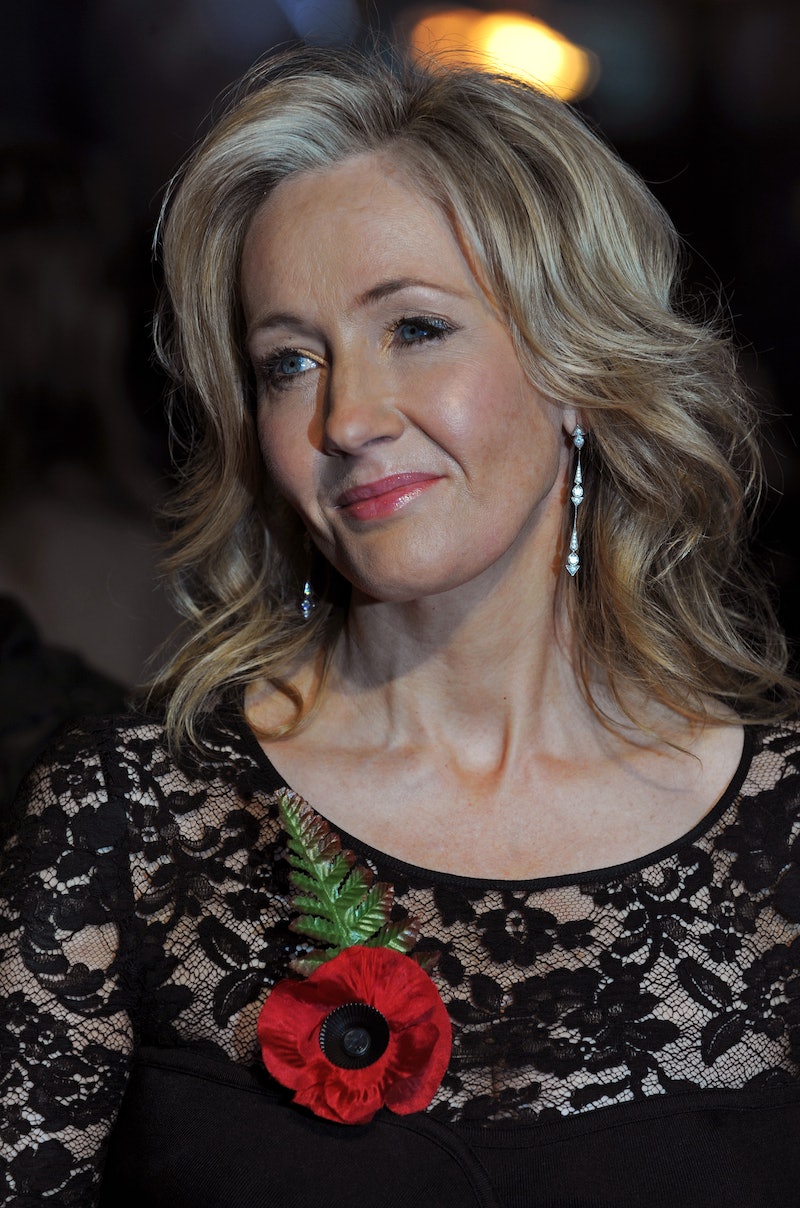 I, like many of you, spent a healthy amount of time as a child pretending that the Harry Potter universe was actually real. I wondered if maybe my elementary school could have been under an enchantment spell and was instead secretly harboring a centuries old castle somewhere in the basement. As every fan has lamented, I hemmed and hawed over whether or not I'd get my Hogwarts acceptance letter (still do, to be honest) and, I even thought about the advantages of a pet owl. But, mostly, I wished that the omniscient and seemingly (at the time) omnipotent Dumbledore was real and able to pass down to me sage advice and offer a helping hand for any and all of life's issues. As it turns out, he does exist. Because J.K. Rowling is Dumbledore, if her interaction with fans on Twitter is any indication.

I know, I get that she wrote him into existence and, duh, there's going to be some similarities. But, just because you create a character doesn't mean you embody them... until you do. As Buzzfeed reports, J.K. Rowling once again made a profound difference in a fan's life and, in essence, made the headmaster come to life. Apparently, not only did they interact on Twitter, but when the fan, Johnnie Blue, met her at a book signing, it began a sweet friendship between them.

"Johnnie gave Rowling a notebook that was personally designed by Jason Cockcroft (who did the cover art for UK Bloomsbury Harry Potter books). Inside the notebook he left a handwritten letter for the author about how she changed Johnnie’s life."

Then, as the site points out, she gave him a gift in return. They say,

"When he came home from school on Aug. 20, Johnnie had been sent an envelope with a Chamber of Secrets stamp on it. Here’s what it said:

You have fantastic handwriting. That’s not the most important thing I’ve got to say to you, but I thought I’d mention it — I’m a connoisseur.

On to more important things:

What you say about Harry helping you at what was clearly a dreadful time in your life means more to me than I can easily express. I freely confess that I loathe bullying and the way it is still so often “handled” in schools. Your experience is shocking and disturbing and that you have turned out to be a compassionate, moral, highly motivated person is high testimony to your courage. Gryffindor for you, my lad…

Thank you so much for the stunningly beautiful notebook. I love it.

This letter seems to be a series of non-sequiturs, but why break the pattern: I have family roots in Ayrshire — Arran, to be precise. And I’ve never been there. Embarrassing, isn’t it? Don’t tell the Nationalists.

I’m sure we’ll see each other again. In the meantime, I’ll watch out for you on Twitter.

BuzzFeed notes that they still keep in touch on Twitter. But, this gesture is really just the beginning of the thoughtful things she's done for fans. Especially those, who like Harry, may be misguided or in need. And there she is in all of her Dumbledore wisdom and heart to give her unwavering support.

Like, for instance, as Hypable reports, when she actually roleplayed Dumbledore in a letter to a young teen who had just lost her family in a tragic mass shooting and had quoted the wizard in her eulogy for her family. The site relays that the manager of the Facebook page set up for the girl, Cassidy Stay, to meet Rowling said,

"...J.K. Rowling did, in fact, write her a personalized letter from ‘Dumbledore’ (hand-written with purple ink). She was also sent a wand, an acceptance letter to Hogwarts with a school supply list, along with the 3rd book with JK’s autograph."

Or, when she does your average, everyday, run of the mill type things. Like, oh I don't know, keeping the magic alive for all of the now-adults who grew up with the books as their sort of gospel.

And, she's cheeky about it, too:

Thanks for bringing Dumbledore to life, Jo.