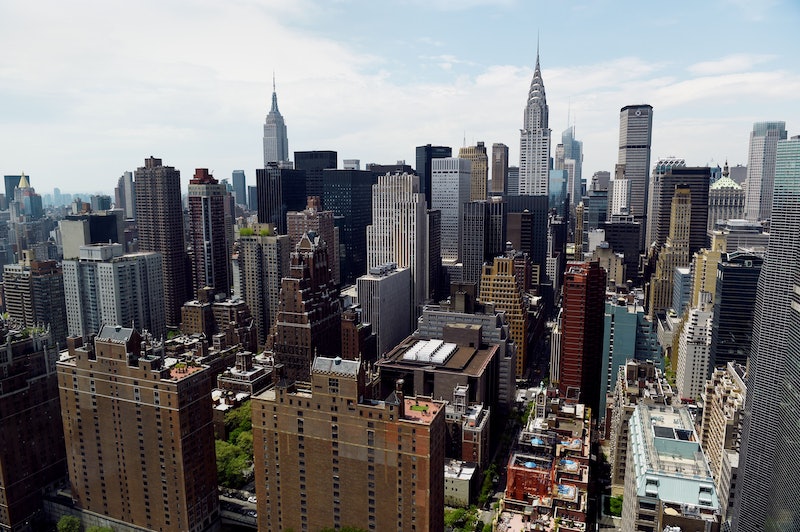 How much does it cost to live on your own in New York City? Well, thanks to the real estate site Zumper, you can find out with their up-to-date maps of the median rent in New York City for a one-bedroom apartment. It's worth noting that they don't provide any details on the Bronx, Staten Island, or most of Queens, so it isn't really a complete picture; still, though, if you've ever wondered what it would take to live like you're in How I Met Your Mother or The Mindy Project, here's your chance to find out.

The good news is that, according to Zumper, NYC rents actually declined slightly in January for the first time, from a median one-bedroom rent of $3,100 in December to $3,000 now. It's a small decrease — only about 3 percent — but every little bit helps, right? Especially when (let's face it) this news is pretty bleak as far as our prospects of ever living on our own go.

But regardless, here are some noteworthy neighborhoods from the Zumper analysis:

According to Zumper, rents in Williamsburg bucked the downward trend and actually went up by 5 percent during the first part of 2015. Apparently gentrification marches to the beat of its own drum — or whatever instrument the hipsters are into right now.

If you think that Brooklyn is still universally cheaper than Manhattan, think again. DUMBO, which stands for Down Under the Manhattan Bridge Overpass, is still the most expensive neighborhoods in Brooklyn and one of the most expensive in the city when it comes to finding a one-bedroom, with an average monthly rent of $4,000.

Greenwich Village vs. The West Village

There are times that having in-depth analysis can help you make a clear choice — and then there are times where it more or less tells you to stop freaking out about your options. Case in point: Greenwich Village vs. the West Village, two neighborhoods located right next to one another whose median one-bedroom rent is exactly the same. So whichever you pick, odds are you'll be paying $3,800.

Downtown Brooklyn was another neighborhood that went up instead of down so far in 2015. In fact, its one-bedroom rents rose a total of four percent to $3,080 a month, putting it above the city average.

But even though lots of things change, some things never do. Tribeca remained the most expensive neighborhood in the city — and the country, too, for that matter. A one-bedroom apartment there will set you back about $4,150 a month.

And here are the full maps for your perusal.

And you can check out more analysis at Zumper.